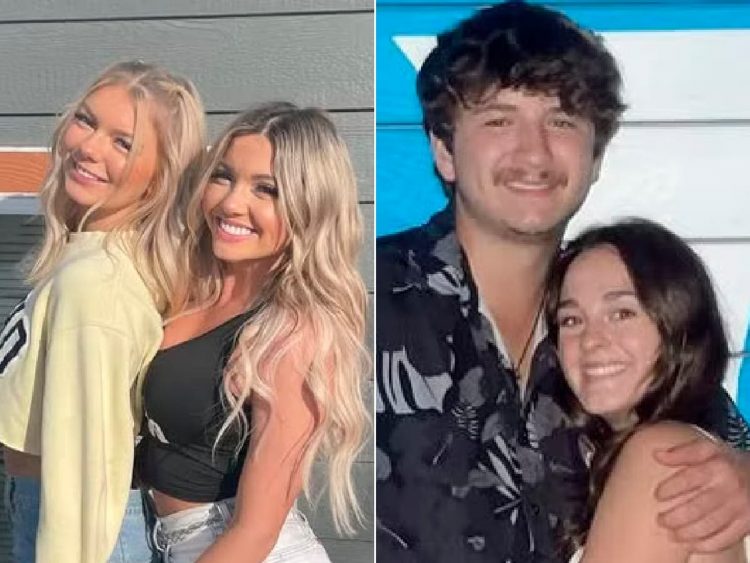 Sign up to our free morning US email news bulletin

The town of Moscow in Idaho remains on edge with the accused who stabbed four students to death in a brutal “targeted” attack still at large and police cautioning the community over the looming threat.

The bodies of University of Idaho students Ethan Chapin, 20, Madison Mogen, 21, Xana Kernodle, 20, and Kaylee Goncalves, 21, were found in an off-campus home in Moscow, Idaho, on Sunday.

The victims died of stab wounds from an “edged weapon such as a knife” that hasn’t been recovered. Police on Wednesday said there were still no traces of the murder weapon or any identity and location of the suspect.

Moscow police chief James Fry revealed that during the time of the murder, two other roommates were also present in the house, but were left unharmed.

There was no hostage situation, he said.

Mr Fry partially walked back the department’s previous statements, saying “there is a threat out there still, possibly”. “… we all have to be aware of our surroundings and make sure that we’re watching out for each other,” he said.

Timeline: What we know so far about the murder of four students

Officials in the small town of Moscow, Idaho, have been a little cryptic about what happened to four University of Idaho students who were murdered last weekend.

Ethan Chapin, Madison Mogen, Xana Kernodle, and Kaylee Goncalves were found dead at a house near the University of Idaho campus on Sunday, mere hours after posting smiling photographs on Instagram.

So far, the suspect or the murder weapon have not been traced and the police have cautioned the small town of 25,000 people to stay vigilant.

So what exactly happened in the hours before and after the students’ bodies were discovered? Here’s the best timeline we currently have.

The sister of one of the four students fatally stabbed in Idaho has urged students to leave the town of Moscow as the killer still remained at large, with the police confirming a threat to the community.

“No one is in custody therefore no one is safe,” Autumn Goncalves, the younger sister of Kaylee Goncalves, said in an Instagram post on Wednesday.

“If you have friends, family or loved ones in Moscow our family encourages you to get them home,” the sister added.

“This person is dangerous and he is not in custody. How police say ‘no threat’ MAKES NO SENSE.”

Police cautions ‘there is a threat out there’

Moscow police department backtracked on their previous statement, cautioning that the community could be under threat.

Moscow police chief James Fry on Wednesday said: “There is a threat out there still, possibly”.

“We cannot say there’s no threat to the community and as we have stated, please stay vigilant, report any suspicious activity and be aware of your surroundings at all times.”

Flood of donations for victims’ families

Online fundraisers have now been set up for four of the victims, and are seeing a flood of donations.

Ethan Chapin’s college fraternity Sigma Chi has set up a GoFundMe for his family here. A close friend of Xana Kernodle’s created another GoFundMe here. And you’ll find a fundraiser for the families of Madison Mogen and Kaylee Goncalves here.

At the time of writing, all of them were either close to or well past their fundraising goals, with some donors giving as much as $1,000 or even $3,000.

‘There was no one giving off bad vibes’

The food truck employee who served Madison Mogen and Kaylee Goncalves what may have been their last meal says he did not see anything unusual that night.

“There was nothing out of the ordinary,” Joseph Woodall told DailyMail.com. “They were definitely having a good time, but I don’t remember anybody standing out… there was no one giving off bad vibes or standing around.”

He said the two women were “slightly intoxicated” but did not appear much different from the other people he served.

The truck’s owner John Fletcher also said he had not received any requests for camera footage from law enforcement, although it’s not clear when that was.

Investigators have described the crime scene as extremely bloody and among the worst they’ve ever encountered, according to reports.

County coroner Cathy Mabbutt, who is examining the four bodies, told KHQ-TV: “Gruesome. I’ve never seen anything like this in the 16 years I’ve been in this position.”

Police sources also told DailyMail.com that here was “blood everywhere” and that the victims were left to bleed to death following the attack.

“We have investigators who have been on the job for 20, even 30, years, and they say they have never seen anything like this,” said one.

Indeed, a photograph showed blood dripping down the cement base of the wall from underneath the exterior wooden slats.

The Mail reported that Ethan Chapin, one of the victims, was found on the second storey of the three-level house. Police have not said whether all the victims were found in the same part of the building.

The two women visible in a live stream from a local food truck are indeed murder victims Madison Mogen and Kaylee Goncalves, according to local media.

In the press conference held earlier today, KREM 2 News reporter Amanda Rowley said she had shown the footage to the victims’ families, who had been able to identify the two women.

Chief Fry said the housemates were unharmed and that they were still there when police arrived, but did not seem to indicate that they were suspects and also said there was no hostage situation. At the same time, he pushed back on a reporter’s description of them as “witnesses”.

So what exactly happened here? Were these housemates involved in the murders? Did they somehow sleep through them? Was it them who called 911, or someone else? What have they told police?

For now Mr Fry refused to divulge those details, saying that doing so might compromise the investigation.

Moscow police backtrack on claims of ‘no public danger’

In the press conference earlier today, Moscow police more or less admitted that they were wrong to say there was “no imminent threat to the community at large”.

Asked at a press conference how he could be sure there was no danger, police chief James Fry admitted: “That’s kind of unknown… we still believe it’s a targeted attack, but the reality is, there’s still a person out there who committed horrible, horrible crimes.

“So there is a threat out there still, possibly. We don’t know it’s going to be to anybody else. But we all have to be aware of our surroundings and make sure that we’re watching out for each other.”

The owner of local restaurant Mad Greek posted a tribute to two of its workers who were killed in Sunday’s attack.

“It is with a broken heart and deep sadness to share with you that we have lost two of our own here at Mad Greek. Xana and Maddie have been servers here for several years and brought so much joy to our restaurant and all of those they encountered,” the restaurant wrote in a social media post on Tuesday.

“Maddie was also the face behind our social media pages. With this incredible loss, we have shut down to process and grieve. Our deepest sympathies go out to all of the friends and families of Xana, Maddie, Ethan and Kaylee. We as a team offer our support to anyone in need at this time.

“You will be greatly missed. Thank you for being a part of our family/team and for helping me so much over the years. Until we meet again. Love, The Worlds Best Boss.”

The restaurant closed for a couple of days following the murders. In a Tuesday update, it announced that it will reopen on Thursday.

A Single Brain Molecule Can Label Memories As Positive Or Negative: Study