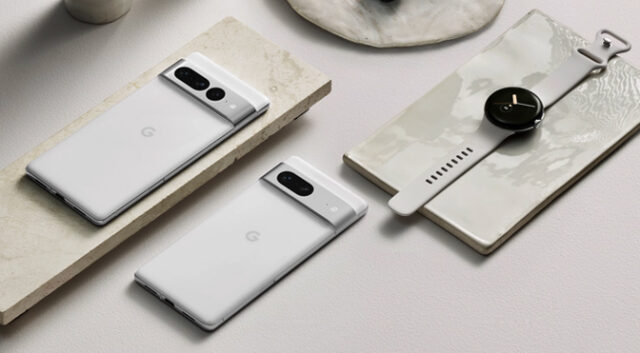 Google has finally unveiled its latest hardware products, including the Pixel 7, Pixel 7 Pro, and Pixel Watch. It didn’t even try to keep the basic details secret, and with the help of a few leaks, there were no major surprises. Google’s new family of devices is shaping up to be more cohesive than ever before, and most of them are available for pre-order now. The notable exception was the Pixel Tablet, and here, there were a few fun surprises.

Google’s product announcements often emulate Apple these days, so we didn’t get much in the way of speeds and feeds. The phones have an aluminum camera bar rather than the glass and plastic of last year, and it merges seamlessly into the rest of the frame. All the metal is made from recycled material, too. While these phones have the new Tensor G2 chip, Google glossed over the architecture specifics (yes, it’s a bit more modern and capable). Instead, we heard about what it can do for Pixel. For instance, Tensor G2 powers several new camera improvements like Photo Unblur, which sharpens fuzzy photos, and it even works on images you’ve taken on old phones. When you zoom in, a new generation of Super Res Zoom will sharpen your photos, no matter which lens you use. At 5x, the new telephoto sensor takes over, letting you advance up to 30x with AI sharpening.

Google says that Night Sight is twice as fast on its new phones thanks to tensor G2 as well. Google also promises a cinematic video mode and macro images via the new ultrawide module. It can even help blind and low-vision users take a perfectly framed selfie with Smart Selfie, which uses voice prompts to help you line up the shot. Clearly, Google paid a lot of attention to the camera experience. There are new phone call enhancements under the Call Assist banner, too, like “Clear Calling,” which uses machine learning to filter out background noise. A Pixel Watch has been rumored for years, but we’re finally getting it this year. The design looks stunning, but that’s not new — the hardware was already previewed. What we didn’t see before the event was how much Fitbit functionality is baked in. It plugs into the full Fitbit app, tracks your sleep, and does constant heart rate monitoring throughout the day.

All the promo images of the Pixel Watch show the band merging smoothly into the body, and the full reveal confirms the device has a custom band connector, not unlike the Apple Watch. It showed off some nice band options, but it only offers a few styles — hopefully, this works better than the short-lived MODE watch bands Google announced back in 2016. The custom connector means third-party options will be scarce. A strength of the Apple Watch is the expansive ecosystem of officially licensed straps, but we don’t know if Google will do anything similar for the Pixel Watch. The last piece of hardware Google showed off was the previously teased Pixel Tablet. No, it’s not launching yet — that’s still not happening until an undisclosed date in 2023, but the other shoe dropped. As some previous leaks claimed, the Pixel Tablet is essentially a detachable Nest Hub. There will be a speaker dock that charges the tablet, making it useful around the house even when you’re not actively using it. The UI changes to look more like the Nest Hub, but it appears to be more powerful and information-dense than a dedicated smart display.

The Pixel phones and the Pixel Watch are available for pre-order today and will ship in about a week. The Pixel 7 retails for $599 for the 128GB variant, and the Pixel 7 Pro is $899 for 128GB. Unlike many smartwatches, the Pixel Watch only comes in one size (41mm), but there are several different color options. It’s $349 for the Wi-Fi/Bluetooth model or $399 for the LTE version. While the phones are priced very competitively, the Pixel Watch feels a bit overpriced when the Apple Watch SE is $100 less. Google’s got a lot to prove here after years of neglecting wearables.