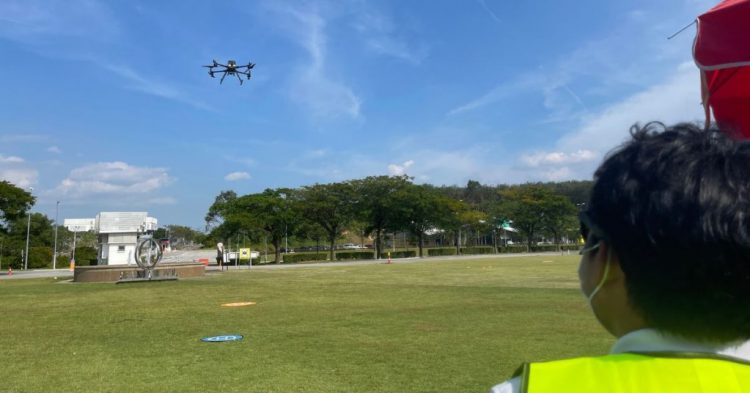 If you’re active on social media, you likely most commonly come across the use of drones in beautiful photography and videography.

Essentially, a drone is a flying robot that can be remotely controlled or using software-controlled flight plans in its embedded systems. This works in conjunction with onboard sensors and a GPS.

Beyond their uses for social media or marketing content, they’re widely used as working partners in various industrial sectors, where they execute routine work functions.

These include agricultural processes, search and rescue, monitoring, and more. Their use cases are growing with each advancement of drone technology, and they’re increasingly used in demanding and dangerous work to prevent potentially fatal work accidents too.

Pioneering the growth of drone applications in industries in Malaysia is Drone Academy Asia (Drone Academy), and here’s what they’ve been doing thus far.

In 2018, commercial usage of drones was gaining steady momentum and more industries started adopting drones to become a part of their regular operations.

However, there wasn’t yet a Malaysian organisation that focused on providing comprehensive and professional drone training for industry usage.

“I personally recalled when we first started, the drone usage in Malaysia was mainly skewed towards the aerial photography and hobbyists,” explained Erin Hoo, Director and Accountable Manager of Drone Academy Asia.

When the team was doing market research in the early days, the most pressing question they received was whether they could upskill workforces in drone applications catered to their industries.

Hence, Drone Academy was launched as a solution to such demands. It was also to establish itself as an organisation dedicated to providing drone training.

“I firmly believe that with all the latest technologies, we need solid training now more than ever. Only with knowledge can we integrate drones in a sustainable manner,” shared Erin.

Despite their experience in dronetech, the team still acknowledges there’s always more to learn, so they often educate and upskill themselves with the help of other experts.

“This includes formal and informal interactions with drone manufacturers and drone service providers and involving themselves in drone operations,” mentioned Erin.

Only this way can they produce competent remote drone pilots who fully understand aviation safety, allowing the industry to grow in a way that doesn’t jeopardise the public’s safety, but instead benefits it.

Drones as a benefit

According to Erin, previously, most of the individuals they spoke to were excited about the technology, but did not know what they wanted to apply it to.

A testament to the industry’s progression, however, they now encounter many individuals and organisations who are clear on their objectives in implementing drones.

On the side of regulators, the Civil Aviation Authority of Malaysia (CAAM) has supported the advancement of integrating drones into the Malaysian airspace. Hence, there is an increase in awareness of safety rules when operating drones.

In line with the CAAM’s objectives, Drone Academy has come up with a solid regulatory framework and a standardised curriculum approved by the CAAM.

This will provide a greater boost of confidence for enterprises and industries to expand their investment in drone technology. In turn, this will increase employment opportunities across industries that utilise drones such as energy, surveying, surveillance, and agriculture.

“This is why as a CAAM-approved Remote Pilot Training Organisation, we have a duty to ensure that our trainees have a deep understanding of the importance of safety in drone operations,” said Erin.

By putting aside their interests, the academy believes drone usage will reduce operating costs and increase productivity in return.

Additionally, the academy also had its representatives invited to speak at various conferences and seminars on drones.

Erin has faith that this will augur well for the future outlook of Malaysia.

The future of drones

In the eyes of the academy, drone training and education will have to align with real industry needs.

“This is why we always stress that our trainees should match their training needs to an outcome they want to achieve with drones,” added Erin.

Currently, the academy does not provide programmes for children as they are choosing to focus on using drones for work purposes.

Moving forward, Drone Academy’s short-term goals include continuing to deliver optimal learning experiences for their trainees in this ever-evolving market.

This includes growing the academy’s team, increasing their internal know-how, and establishing partnerships within the Malaysian market.

In the long term, they are looking at developing more technical and advanced application-specific courses, as this would be in line with industry needs.

9 Cyber Security Tips and Best Practices for Your Business