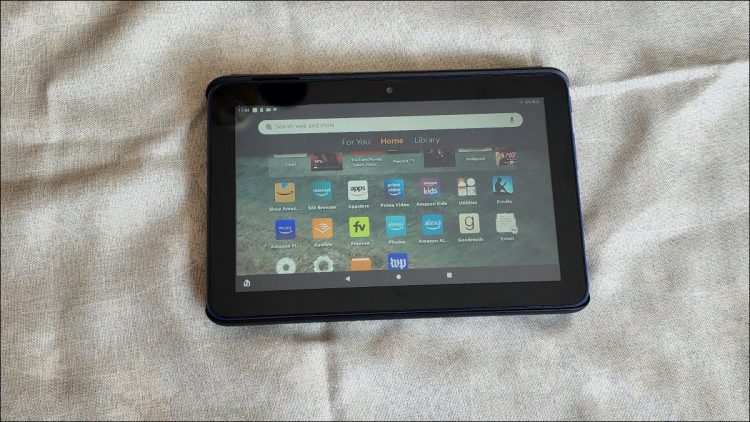 The 7th mainline entry in Amazon’s Fire series of tablets predictably brings improved specs, a longer battery life, and a $10 price increase. However, while the Fire 7 Tablet (2022) remains an inexpensive way to enjoy media, it seriously lacks power.

And What We Don’t

I was sent an Amazon Fire 7 tablet (2022) and a corresponding case for it. With the Fire 7, you’ll get a USB-C charging block and a cable to go with it—everything you need to charge the device.

The case gives the tablet a more professional look and succeeds in making it pleasant to hold. Without it, the Fire 7 feels like a small slab of plastic.

The tablet itself is minuscule as ever, weighing a little over 10oz and standing at 7in long and 4.6in wide. This is a tiny tablet about the size of your average book—only thinner. It feels nice to hold.

The Fire tablet lineup has been small so far, and the seventh iteration isn’t breaking tradition. It’s easily suitable for travel in handbags or even your back pants pocket. I found its size great while reading, but generally detrimental to anything else.

Visually, it certainly looks aged. Not much has changed from the previous model, staying similar right down to the screen. The display is relatively low-resolution at 600×1024 pixels, notably less than the 1920×1080 an HD screen would offer. This carried over from the previous model and is likely a key area where Amazon saves production costs to ship this tablet at a budget price.

Given that the Fire 7 is a $60 tablet, I can forgive it for not being high definition. Still, it’s a mark that makes it hard to consider using the tablet for reading comics or watching movies if the quality is something that matters to you.

Under the hood is where the Amazon Fire 7 (2022) steps up over its previous release. The RAM, processor, and battery are all improved from the last gen. Still, they’re nothing to write home about. While the previous version has a 1.5GHz CPU, the new one has a 2.0GHz ARM Cortex-A53, which isn’t much of a powerhouse. There’s also 2GB of RAM powering it, and while that is a 100% improvement over the previous model, it’s still not great.

2GB is on the low side for modern tablets, so it’s good that the Fire 7 has finally reached that barrier—it could also stand to be more than just adequate. 2GB means that Amazon’s budget tablet still lags a considerable amount, and while you can play games on it, your selection is minimal.

Nowadays, 5GB of RAM is about average for tablets, and while the Fire 7 is undoubtedly a wallet-friendly purchase, it shouldn’t lag as much as it does. I’d gladly pay a few extra dollars for a cleaner experience because it’d still be far more affordable than most popular tablets like the Lenovo Tab P11 Plus.

The storage situation is pretty routine. The Fire 7 comes in either 16 or 32GB, a current standard. If that’s insufficient for you, slot in a microSD card of up to 1TB on the side. It’s a solid storage size with some decent upgradability. If you want to take your Fire 7 for a long trip, you can easily load up on movies and watch them on your journey.

The Fire 7 has a Li-Ion 2980mAh, non-removable battery that provides up to 10 hours of use. It, like the other internal parts, is better than the previous iteration. I’ve had it average around 9 or 10 hours under light use, and I noticed a significant drop while handling more hardware-intensive apps.

Charging from empty to full took somewhere in the range of four hours, which is pretty slow. There’s no real way to improve this regardless of the charger; it simply has no quick charging.

I found the Amazon Fire OS (Operating System) to be a little inelegant. A feeling caused by large, screen-filling items and a lot of vertical scrolling to get past. While Fire OS 8 is based on Google’s Android, Amazon has twisted it into something that feels more like a giant advertisement for the company’s other services. Booting it up, the Fire 7 (2022) bombards you with an ambush of advertisements and sign-up forms for their digital bookstores and streaming services.

Once you’re through that, you’re faced with the home screen that might as well be Amazon.com’s front page. It’s loaded with more ads for things you should watch and stuff you haven’t finished—it’s relentless. It feels like Amazon sold you a tablet at a lower price just so it could advertise to you; it’s ugly and annoying. Not to mention that I’ve had it lag several times when trying to bring up more of the app collection.

For that reason, the Fire 7 is great for people who already subscribe to many of those services, less so if you don’t. However, while Fire OS is based on Android, it doesn’t use the Google Play Store (in favor of the Amazon App Store) and isn’t compatible with some apps you’d find there.

You can, however, sideload the Google Play store, which opens up a few more options—just don’t be surprised if your favorite app isn’t compatible.

Predictably, Amazon’s Fire 7 supports Alexa. If you’ve used one of these virtual assistants, you’ve pretty much seen them all. Alexa works the way it normally would. Its presence here is significant because it makes the Fire 7 a viable controller for other Bluetooth and smart home devices.

I still don’t recommend using the Amazon Fire 7 for your office because of how weak it is elsewhere, but having one around the house can do a lot for convenience. Just being able to ask Alexa to look up a recipe in your kitchen is a nice option to have.

Sound: Use Earbuds Instead

The best thing I can say about the Amazon Fire 7 Tablet (2022)’s audio is that the device has a built-in 3.5mm headphone jack. It has some loudspeakers, so they are functional. They lack punch, but given that this is a budget tablet, I don’t mind it too much.

You absolutely can watch things on your Fire 7 without anything else, I just wouldn’t recommend it. If anything, the weak audio quality makes all of the lag and advertisements even more frustrating. If Amazon is going to advertise to people so pervasively on a device they purchased, it should perform decently.

Like the sound, the Fire 7 (2022)’s cameras are simply adequate. It has 2MP front- and rear-facing cameras with 720p HD video recording. They’re functional and good enough for a video call—but otherwise, you should just use your phone.

Everything needs to fall in line to get a half-decent shot with this camera. Too much light makes it appear washed out; not enough light makes it dim. It’s perfectly serviceable and about what you would expect for the price. Still, if you wanted your tablet to have a solid camera, you won’t find it here.

The Amazon Fire 7 Tablet (2022) may sound underwhelming, but you have to remember its exceptionally low price. The tablet is lightweight and versatile, but the frequent lag sours the experience.

Over the years, Amazon has added functionality to the Fire 7 to keep it a relevant, price-efficient option in an evolving field. Through that lens, it’s pretty easy to see why the Fire 7 lacks some of the processing power of its more expensive competitors. It’s cheap, it feels cheap, but it works.

My experiences with the Fire 7 Tablet (2022) were positive overall. It’s a good place to read books or watch videos. As such, it’s still an excellent device for that, and it’s an affordable option for some entertainment while traveling. I just don’t believe you should be using this for your office.

There still aren’t many tablets on the market at the Fire 7’s price point, and that alone is a powerful trait to have. That value is also improved by having subscriptions to existing Amazon services. The OS is annoying, but it’s not inoperable.

Ultimately, the Amazon Fire 7 (2022) is undoubtedly a step up from the last release, but whether or not it’s worth the extra money is questionable. If you have a generation-older Fire 7 Tablet, It probably isn’t worth upgrading to this model. However, if you’re someone who is just looking for a cheap tablet to take on trips and aren’t at all concerned with the quality, consider picking one up.

Alternatively, if you’re looking for a budget-friendly (and durable) tablet for your child, check out our review of the Amazon Fire 7 Kids Tablet (2022).

And What We Don’t

Indian iOS users can get ‘verified’ on Twitter by paying more than $8, but won’t get access to key features- Technology News, Firstpost

Things To Expect From A Digital Marketing Company In Dubai