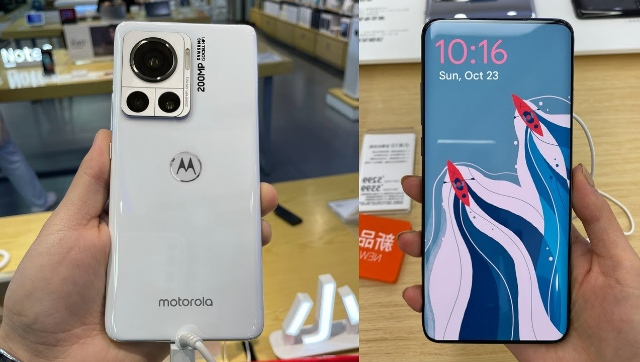 Motorola is launching their flagship device, aptly called “The Frontier” sometime next month. Having focused on budget and mid-range phones for years now, Motorola is hoping that their upcoming flagship, the Frontier will go a long way to help re-establish the brand as a player with serious chops.

We had earlier reported that the upcoming Motorola Frontier would feature the world’s first smartphone camera sensor with 200MP, and actually beat Samsung. Motorola Frontier is reportedly using Samsung’s ISOCELL HP1 sensor for its main camera. It will also feature the 50MP ISOCELL JN1 and 12MP Sony IMX663 as secondary and tertiary sensors.

Samsung ISOCELL HP1 uses the ChameleconCell pixel-binning tech that effectively turns a block of 16 pixels into one pixel when shooting in low light conditions. This means that when utilising the tech, the 200-megapixel sensor will actually create 12.5-megapixel images. Shooting in daylight or in well-lit conditions should give you full 200MPs to play with.

Another major improvement that we will see in the Motorola Frontier, would be the charging speeds. Up until now, Motorola has often lagged behind others in terms of charging speeds, having managed a high of 68W in its current Edge 30-series flagship while others such as OPPO forged right ahead with 80W or more. Some upcoming devices from Realme & iQOO are working on fast charging speeds that are near about 200W. With the Frontier, Motorola will be providing users with 125W fast charging and wireless charging with 50W.

Just to be clear, Motorola won’t be selling the device with the moniker Frontier, that is just the codename. In all likelihood, Motorola will be going for something like the Edge 30 Ultra instead. This is because it is expected to improve vastly on its immediate Edge X30/30 Pro/Plus predecessor.

How Movie Trailers Evolved Into Their Own Artform (With Examples)