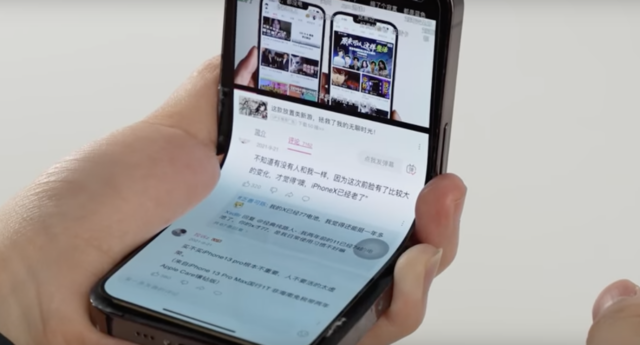 For all this talk about features Android and iOS have or don’t have, Android users still hold one exclusive boast: the foldable smartphone. Between the Samsung Galaxy V Fold, the newest Motorola Razr, and a few other deliciously clack-able smartphones, iPhone users are left to gaze at their flat, static screens in disdain—except for one group of iPhone hackers in China, that is.

A team of engineers overseas claims they’ve put together the first foldable iPhone. The engineers, who run a YouTube channel called “Scientific and Technological Aesthetics,” published a video on Monday showing off the “iPhone Fold.” Though the audio is in Chinese, the subtitles are in English, helping to reveal what ended up being a highly convoluted build.

Across more than 200 days of tinkering, the team dissembled dozens of iPhones and used their screens to create a six-layer, bendable screen atop what appears to be a split iPhone body. Removing the screens alone turned out to be a “nightmare,” according to the lead engineer on the project. Not only did the team have to be incredibly careful with the amount of force they applied, but they had to keep each dissected iPhone relatively warm to soften the glue, which holds together two layers of the iPhone’s touch screen.

Once they’d perfected the iPhone screen removal process, the engineers focused on which hinge to use for their hack. Though they tested the hinge used in the Samsung Galaxy V Flip, the fold itself was too large, forcing them to adopt the hinge from the 2020 Motorola Razr. To save space, the engineers built a custom battery with a fourth of the iPhone’s normal capacity, removed one of the iPhone’s speakers, and ditched all wireless charging and MagSafe components. A few 3D-printed body components later, the team was able to cram the rest of the iPhone’s internals into a folding frame.

Last of all was the user interface, which the team customized via jailbreak to suit the folding screen. The resulting device does indeed bend and fold while maintaining what appears to be normal operability. While the phone isn’t as sleek as a true Apple product would normally be, it doesn’t look terrible, either—though its ability to survive long-term practical use is certainly questionable.

Despite their novelty, folding phones don’t solve very many real-life issues, which might be one of the reasons Apple hasn’t bothered to come out with one yet. Even if the above hack is real, it’s unlikely it’ll push Apple to budge on its flat-phones-only stance anytime soon.

Worst ‘Shark Tank’ investment ever was the Breathometer