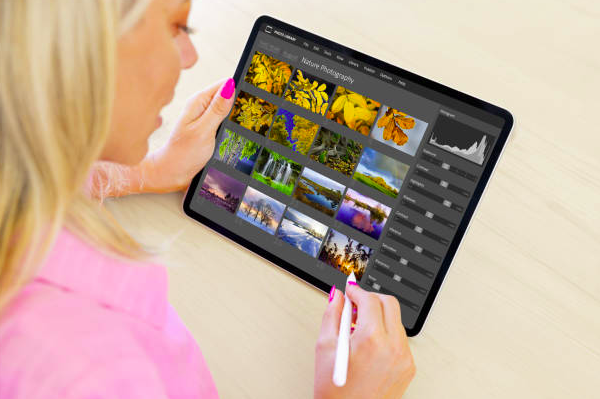 The Photo Editing Software is the most efficient option to modify your photos to suit your needs. You can alter the intensity, brightness, contrast, or orientation or you might want to add something else to make the pictures look more appealing.

Editing photos is similar to applying the finishing touches to paintings. Photos often don’t look as professional as they can until you add that final finish.

Because the majority of people utilize their phones to take photos We have compiled a list of the top photo editing apps that you can utilize at any time to take your photos to the highest stage.

Also, you can use waifu2x to increase the size of an image. It’s a no-cost online tool for upscale, designed to enhance images by decreasing noise.

The online photo upscaler will allow you to enhance the photos you have taken to fulfill the look you want.
No longer do you must sit until you return to your computer desktop to modify your photos or apply filters, alter colors, or eliminate unwanted objects.

There are three kinds of photo editing apps for Android. There are some apps that try to compete with desktop editors with the power of Adobe Lightroom CC.

The second is a less powerful editor, similar to Snapseed that performs the fundamentals and attempts to do the heavy lifting for you.

The article below will allow you to learn about the top 10 apps for editing photos on Android. We’ll also assist you to select the ideal applications for editing videos and photos to meet your requirements.

Simple and minimalistic user interface Adobe Photoshop Express has a simple and minimalist interface. It is one of the top Photo Editing Apps for quick, simple, and effective editing on mobile devices.
It’s loaded with important features such as crop, straighten rotation, flip, and straighten images.
Photoshop Express Photo Editing app includes one-touch filters, as well as a range of effects, color auto-fixes, frames, and even advanced tools, such as Image Rendering Engine to handle huge files such as panoramic images.

This feature, known as the Noise Reduction feature helps to reduce undesirable grain and speckling that can appear in photographs taken at night.

Its Photo Editing app is free to download and has no ads. Additionally, it gives you the option of sharing images via Facebook, Twitter, and other social networks.

With more than 100 million users, PicsArt has been one of the most popular photo editing applications available in 2022.

The reason PicsArt’s photo editing application is an outstanding app can be attributed to the large number of possibilities you have to edit your images.

Other features that are part of the Photo Editing app include collage frames, drawing stickers, collages, and many more. The app for editing photos is free and comes with certain in-app purchases. However, you have to deal with advertisements.

There aren’t any other photo editing applications that have the power of Snapseed flexibility. However, it’s not the best choice intended for those who want fast results and exciting projects.

One of the new features that were added this year in this app for editing photos includes the double Exposure filter (for mixing photographs).

The capability of saving Stacks (layers) of the edits you’ve made to a photo as a “Look,” which can later be applied to other pictures as well as shared among other members.

The Fotor Photo Editing application includes more real editing tools than other apps and has the capability to improve photos using the click of a button to your comfort.

Some other features included in the Photo Editing app include crop rotation and brightness, contrast, intensity, saturation, and vignetting. Shadows highlights, temperature color, RGB, and, should those tools not work there are more than 100 filters available for you to pick from.

The PhotoDirector photo editing app is a variety of multi-purpose photo editing software. It features a sleek and user-friendly interface, where you can quickly alter the tone and colors of your photos with its simple but powerful tools.

Photo Editing Photo Editing app has an camera built-in feature in the app that you have the ability to create live effects while you take your pictures. Edit your photos and then share them with ease via Facebook, Flickr, and other social media sites.

Pixlr is another free image editing app that lets you edit photos from your camera roll, as well as create new ones you can take using the application.

One of the primary features that I noticed about the Photo Editing app that stands out for me is it Pixlr can overlay multiple images over one another, and change their opacity as well as size, which is a little like a desktop editing program that can support layers.

Instead of placing your own images on top of each other, you can also use some of the partially-transparent overlays that are provided, such as smoke, chemical burn, or outer space image.

A variety of tools for adjustment include adjustment tools in Pixlr. You can apply pencils, silk posters, watercolor vintage, old, unicolor, or cross effects to your image, in addition to other things.

The Photo Editing app Also supports rotating and cropping your image. It also applies an automatic fix to it, as well as changes the hue, contrast, blur sharpen, smooth, lighting, and saturation settings.

Photo Effects Pro is definitely a Photo Editing application for people who enjoy playing with effects, filters stickers, filters, and the like that. It comes with more than 40 effects and filters and the capability to add stickers, text, and frames too.

One of the most unique features Photo Effects Pro has is the ability to draw a finger onto your image to create it unique. you can create.

There’s a limited selection of tools for editing photos but you’re sure to get this one to enhance your effects. You can download it for free and install which is great for people who are on a tight budget.

With its easy and simple interface, this photo editing software can be easily managed.

The Android photo editor has all the basic tools one could require to crop, rotate the image, adjust brightness, and lighting, and even add touch-ups.

VSCO Cam was initially an editing app for photos however, it became free last year. VSCO Cam has a great assortment of filters, and they are superior to the ones that are available on Instagram.

Although some filters are free, you’ll need to pay for a lot of others. Don’t let this discourage you from exploring the app, because the filters for free are sufficient for the majority of users.

LightX is among the most anticipated photo editing applications. It was a huge popularity on iOS. There are many good features, too.

It includes a background change tool and color splash effects and a selection of slider tools, including levels, colors, and curves.

You can even merge photos together. There are also blur effects as well as photo collages, shape manipulation, and stickers.

This is in the beta stage. It’s not perfect, which means there are issues. But it is expected to be one day among the five best or six photo editors on the market.

How Intel is planning to use AI, ML and Telematics to make Indian roads safer & reduce accidents by 50% by 2025- Technology News, Firstpost