The 10 Best Movies Told Backwards With Reverse or Nonlinear Narratives 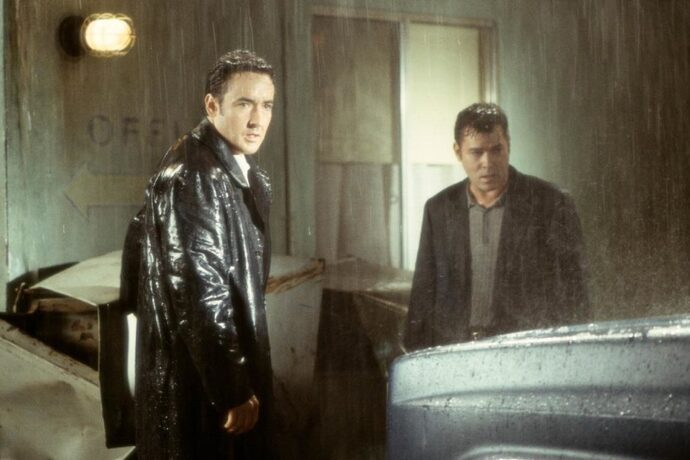 But what about movies where the protagonist isn’t the one going back in time, but rather the movie itself?

Directors like Christopher Nolan like to manipulate their narratives in various ways, and one of those ways is to play with the story’s chronology. By choosing to unfold a story in ways other than linearly straightforward, we get unique cinema experiences that blow our minds.

Here are our picks for the best movies that use reverse narratives—to big and small degrees—and tell their stories in unusual ways.

Not all of Identity is told backwards, but the key moments are—and that adds to the confusion of it all (in a good way). Director James Mangold tricks us over and over again in his neo-noir slasher, mainly by using a reverse structure we think we understand but actually don’t.

After we’re presented with a convict who awaits execution, we go back to where his crime supposedly happened. Ten strangers are stranded in a remote Nevada motel, caught in a storm at night, when they start getting killed one by one. Except, the killer isn’t who we think it is.

As it turns out, the convict murdered long before the events unfolding on screen, and the motel incident is just a figment of his imagination. Suffering with dissociative identity disorder, the motel represents his different personas who are being killed off.

That’s a simplified explanation, so don’t worry if it doesn’t make sense. An Agatha Christie-inspired whodunnit murder mystery would never be as easy as “It was all a dream.” The Hangover doesn’t literally go backwards, but the events are retold in that way. Todd Phillips takes us on a trip through Las Vegas, where four men celebrate a messy bachelor bender. Surprise surprise, they don’t remember any of it the next morning.

We’ve all had those nights where, towards the end, everything seems to get lost in a void of alcohol. But for Phil (Bradley Cooper), Stu (Ed Helms) and Alan (Zach Galifianakis), it’s a little more concerning…

…because instead of just hangxiety, they also wake up to a missing bachelor. And he’s not the only thing missing, alongside some teeth, a random baby, and a Bengal tiger in the bathroom.

The mismatched trio decide to retrace their steps through Vegas to trigger their memories and find their bachelor in time for his wedding. We learn everything that happened the night before and it gets pretty crazy. The conclusion to Donnie Darko raises more questions than it answers, with the biggest question being: Was Donnie dead all along?

You can scroll through hours of film forum discussions without ever arriving at a solid conclusion, which is partly what makes the famed psychological thriller so interesting. Donnie Darko’s box office performance was dismal, but today it’s hailed as a cult classic.

Jake Gyllenhaal stars as the troubled teen Donnie, who—despite living in a typical suburban town—has nothing of an ordinary life. He commits crimes in his sleep, becomes obsessed with time travel, and hallucinates a giant bunny friend named Frank.

And Frank isn’t just there to be creepy. He also comes with a dire warning that the world is about to end.

Director Richard Kelly doesn’t take us backwards so much as he takes us in a circle. The storyline boomerangs on itself when the jet engine that falls into Donnie’s bedroom at the beginning of the movie comes crashing down again at the end.

Only a few chunks of Donnie Darko are told backwards, but they’re absolutely crucial to the entire structure of it. When you’re a kid, you think your best friend is going to be there forever. The idea that you might grow up and go your separate ways seems ludicrous. That’s how Louise (Emma Coles) and Kelly (Kris Bidenko) felt, who were besties as teens but are now closer to strangers.

Some of their differences are obvious: Louise is a dedicated student while Kelly is a drug-loving punk who lives on the beach. But opposites often attract—chalk and cheese—so there must be something deeper going on to warrant such a distance.

Two Friends could have easily slipped your radar as an 80s Australian TV film, but don’t skip it. Jane Campion’s directorial debut shows us the decay of Louise and Kelly’s friendship in reverse order, inversely developing the characters by deconstructing them. Amazon Prime offers unlimited streaming for thousands of great TV shows and movies, plus 2-day delivery, free games and ebooks, and more. Try it for FREE for 30 days!

Atom Egoyan’s Canadian drama didn’t do so well at the box office, but it received two Oscar nominations and won the Grand Prix at Cannes. Based on the 1991 novel by Russell Banks, The Sweet Hereafter is an empathetic exploration of grief and loss.

The death of fourteen children in a crash is already tragic, but the ripples reach wide across a small town where everyone feels like family. It’s up to an out-of-town lawyer (Ian Holm) to file a class-action lawsuit—one that only makes the mourning process harder.

The first scene of The Sweet Hereafter takes place in 1977 and the last in 1968. The timeline is guided by emotion rather than logic. A truly melancholic, naturalistic drama that’s scored to beautiful medieval music. The Prestige doesn’t just go backwards—it goes everywhere. But what more would you expect from a Christopher Nolan film? Fans are divided on whether The Prestige lives up to some of his more famous work, but we definitely say it does. It’s even got David Bowie in it!

The Prestige is all about illusion, magic, and deception. Set in Victorian London, Hugh Jackman and Christian Bale star as rival stage magicians caught up in allusive narration, erratic timelines, and a million red herrings that make for an engaging watch.

Most of the time, the “big reveal” is often just the villain over-explaining all the loose ends before the credits roll. Nolan, however, knows that cinema is about show-don’t-tell, and when we journey back in time to see the whole picture of The Prestige, it’s much more satisfying.

You realize the answer was right under your nose the whole time, but “you won’t find it because, of course, you’re not really looking…” Marc Webb’s romantic sleeper hit uses everything the film medium has to offer without overdoing it. That includes animation, homonyms, old film footage, musical numbers, and, of course, nonlinear storytelling.

We begin in a forward trajectory that sets the groundwork for how Tom (Joseph Gordon-Levitt) met Summer (Zooey Deschanel) and then broke up after 500 days.

500 Days of Summer is told from Tom’s perspective, who goes from adoring Summer, to missing her, to hating her. When his sister reminds Tom that he only remembers the good parts of their relationship, he goes to recall all the issues he previously ignored.

Webb winds backward through the calendar to transition between seasons, giving what would’ve been an otherwise standard rom-com some artistic flair that makes it stand out.

Indie fans love 500 Days of Summer because of how it subverts the genre. It shows us how we often romanticize people (like Tom does) when losing them and moving on is probably better for everyone involved. Surrealism and science are pretty much enemies, as surrealists tend to ignore any notion of time, space, and logic. Although Eternal Sunshine of the Spotless Mind does follow a vague structure—we still have characters and emotions to engage with—it’s very mismatched.

Joel (Jim Carrey) suffers with self-induced short-term amnesia. However, in this film, it doesn’t come from binge drinking but a medical procedure, and it’s not just one day but rather goes back several months.

Joel electively erases his memories of his ex-girlfriend Clementine (Kate Winslet) after he learns that his ex-girlfriend did. But halfway through he decides that he’d rather keep the memories, and thus spends the rest of the film chasing those memories inside his head.

Charlie Kaufman’s psychological sci-fi film is trippy, all thanks to Kaufman’s physical depiction of Joel’s psyche. While Joel travels back through his mind and tries to hide Clementine in his repressed memories, he relives all the lost moments of their past together. When somebody commits suicide, the big questions are always: Why? What could have driven someone—often a loved one—to such extreme measures? And how didn’t anyone notice their distress?

Lee Chang-dong uses reverse chronology to answer this question in Peppermint Candy, in which Kim Yong-ho (Sol Kyung-gu) exclaims “I want to go back again!” So, that’s exactly what we do.

Peppermint Candy is split into seven chapters, starting in Spring 1999 and going back to Fall 1979.

In the Spring, we see Kim crash a reunion picnic and cause general mayhem, probably on account of being suicidal. Two decades previous, the same riverside picnic unfolds, much calmer this time, but still with Kim crying at the end.

Chang-dong implements freeze frames and implication over exposition, which is what makes this such a subtle masterpiece. Peppermint Candy won a whole bunch of awards and opened the 1999 Busan International Film Festival to become a real modern classic of South Korean cinema. If you Google “films told backwards,” Memento will always come up first. Once again, the culprit here is amnesia—always a great way to justify reverse storytelling.

In Memento, Leonard (Guy Pierce) has brain damage from the man who beat him up and killed his wife. Leonard wants revenge, but the only problem is, he can’t remember who made him this way. Ironic, isn’t it?

To escape this catch-22, Leonard writes reminders all over his body so that he can slowly work backwards and recount his steps to before the murder.

Memento is the film that rocketed Christopher Nolan to director-stardom, establishing most of his known trademarks, including time manipulation, noir elements, and dead wives.

Buying a Pixel 6a Means You Get $50 Extra to Spend

7 ‘revolutionary’ features of the iPhone 14 & iOS16 that were already present in Android devices- Technology News, Firstpost