Google’s lobbying Apple to support the RCS text message standard on the iPhone with a new website campaign.

Google’s been championing the RCS standard as a replacement to SMS and MMS, claiming that support on the iPhone would dramatically improve texting across devices.

While RCS adoption in iOS 16 is doubtful, Apple is launching new features within iMessage when iOS 16 gets its public launch presumably in September.

The website puts a particular focus on Apple’s “green bubble” experience when messages are delivered over the SMS and MMS standards, such as the lack of typing indicators, compressed images and less control over group chats compared with iMessage and most chat apps. RCS includes many features seen in iMessage as well as chat apps like WhatsApp and Signal, including typing indicators, encrypted message and higher-quality photo sending.

The campaign is the latest effort by Google to encourage Apple to use the RCS text standard, which currently remains an Android-only text messaging service with half a billion monthly active users. While RCS now has the support of the major US mobile carriers, without adoption within Apple’s Messages app or within devices like basic phones, it’s essentially an “iMessage” for only Android phones. 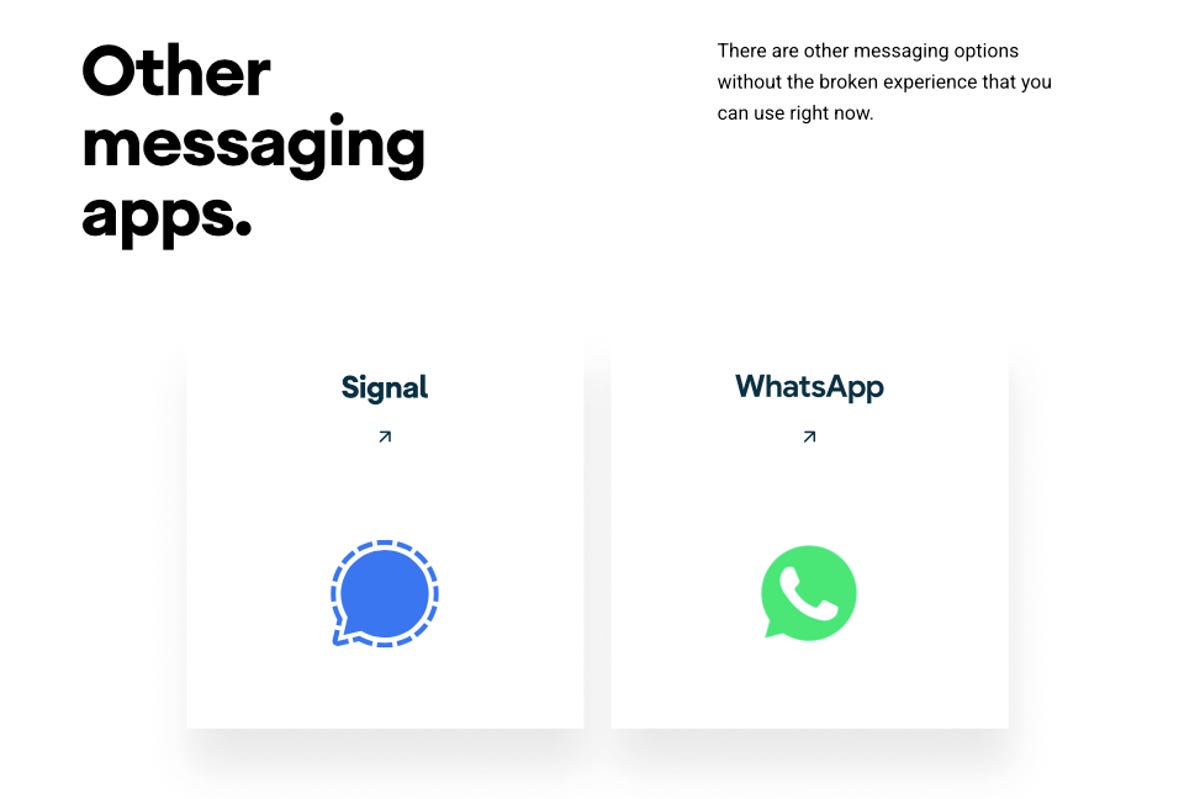 It’s notable, however, that Google’s investment in RCS — otherwise known as Chat within Android’s Messages app — comes after years of failed attempts to cultivate its own chat app service. Most recently Google even created a separate app to replace its Hangouts service that’s also named Chat, and its Duo video call app is merging with Google Meet.

The campaign website also suggests cross-platform chat apps like Signal and Meta’s WhatsApp as options to get a more universal texting experience, as opposed to trying to move people into another Google-owned service. WhatsApp on Tuesday also announced new privacy features that add the ability to quietly leave group chats, hide your online status and block screenshots of content meant to be viewed once.

Google’s lobbying to Apple comes a month before the iPhone-maker is expected to widely release iOS 16, which adds the ability to edit and unsend messages that are sent over its iMessage service. Apple has kept silent on whether it plans to eventually support RCS, but the iOS 16 public beta does include support for message reactions sent over SMS group chats.

Android Finally Has an Answer to iMessage Envy

What is Flutter? Mobile app development for Android, iOS, and more

How to Change the Default Shell to Bash on macOS