4 iPhone and Android Tricks You May Not Know About 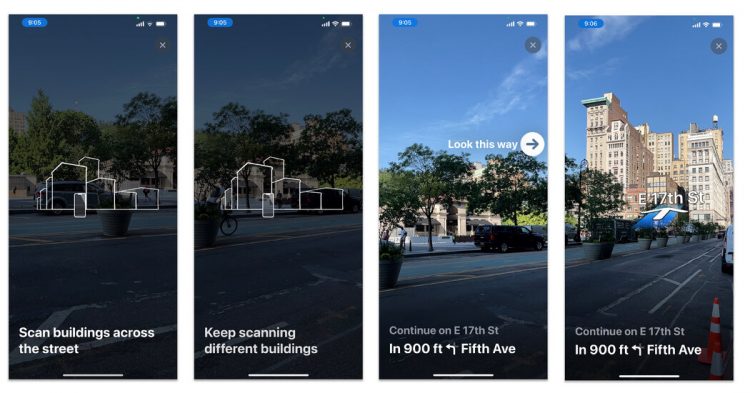 This summer marks 15 years since Apple released the first iPhone, and since then, smartphones have become the Swiss Army knives of technology. But with the avalanche of updates since 2007, less-obvious features are often buried in the process. Here’s a quick look at some possibly overlooked tools, shown here in iOS 15 and Android 12.

A maps app has been part of the modern smartphone toolbox from the start, but Google and Apple have now added the camera and a dash of augmented reality to the experience for extra help with on-the-ground orientation. (Your results will vary by location, though, and be prepared for some battery drain.)

In Google Maps for Android and iOS, enter your destination, tap Directions and select Walking. Tap the Live View icon in the corner of the map. Your phone instructs you to point the camera at nearby buildings so the app can recognize your surroundings by comparing it with Google Street View images. Once set, your directions appear overlaid on the view through on the camera screen to guide you along.

The Compass app included with Apple’s iOS software gives you a general idea of your location.Credit…Apple

Apple Maps uses the iPhone’s camera in a similar way when you request walking directions in supported cities and tap the AR icon on the map screen. (For alternative navigation options, Apple includes a stand-alone digital Compass app with iOS, and Google Maps has a compass that appears onscreen when you start your journey.)

In addition to its tour-guide duties, the phone’s camera can double as a scanner for both documents and quick-response, or QR, codes. In iOS, you can scan a document or receipt in the Notes app by making a new note, pressing the camera icon on the toolbar and selecting Scan Documents. You can also scan and attach a document to an email message you’re composing by tapping the scan icon on the keyboard’s toolbar.

Apple’s iOS Notes app includes a command that turns the iPhone’s camera into a document scanner.Credit…AppleGoogle’s free Stack app includes a document-scanning function and a place to organize the scanned files.Credit…Google

As for those boxy, black-and-white QR codes for websites or electronic payment systems, just open Apple’s Camera app or Google Camera and point it at the QR code to scan it. Many of Samsung’s Galaxy phones have a QR Scanner option that works with the camera app, too.

Both the iOS Camera and Google Camera apps can automatically sense and scan QR codes.Credit…Apple; Google

But there is a caveat with QR codes, beyond privacy considerations: Be careful to scan codes only from trusted sources, because cybercriminals use them for fraud and to spread malicious software.

The phone’s microphone has likewise expanded its powers beyond voice memos, dictation and audio/video calls in recent years. One reason: Apple’s 2018 acquisition of the Shazam music-recognition app.

Shazam, now owned by Apple, can automatically identify songs when the Auto Shazam setting is on. The app can also add a playlist of tracks to Apple Music.Credit…Apple

The Auto Shazam feature — which automatically tries to identify music playing nearby — works on both the iOS and Android versions and can be enabled by pressing and holding the Shazam button when the app is open. (This may sap additional battery juice and data.)

After you identify a song with Shazam, you can play it in an Apple Music, Deezer, Spotify or YouTube Music account. In the Shazam settings, you can connect your list of recognized songs to Apple Music or Spotify.

Once enabled, Google’s Now Playing software for its Pixel phones tries to automatically recognize any nearby music and keeps a list of identified songs.Credit…Google

Many of Google’s Pixel phones include a similar Now Playing feature you can enable in the Sound & Vibration settings. Once activated, the software displays song titles on the Lock screen and creates a history list of the music playing within microphone range. (The Now Playing tool is designed for Pixel phones, but a web search reveals creative coders have adapted it for other Android phones.)

When you need emergency assistance, your phone has shortcuts to connect you. On an iPhone 8 or later, hold down the right-side button and one of the volume buttons until you see the Emergency SOS slider onscreen, and then drag the slide to call the local emergency number; if you can’t drag the slider, keep holding down the buttons until the phone automatically makes the call. In the Emergency SOS settings, you can enable the phone to make an emergency call when you press the side button five times.

Both iOS and Android have shortcuts for making emergency calls with the press of a button or two.Credit…Apple; Google

Android-based phones, including Google’s Pixel and Samsung’s Galaxy models, have their own emergency-service aids. On phones with a power button, hold down that button until you see the Emergency icon and then tap it. On a phone without a power button, try swiping down on the screen to get to the Quick Settings for Emergency Mode or swiping up from the bottom to get to the Emergency Call button. Google’s free Personal Safety app for Android provides more tools for handling future emergency situations, for those who like to be prepared.

Not just new iPhones and iPads, Apple is set to launch a whole bunch of new devices this fall- Technology News, Firstpost