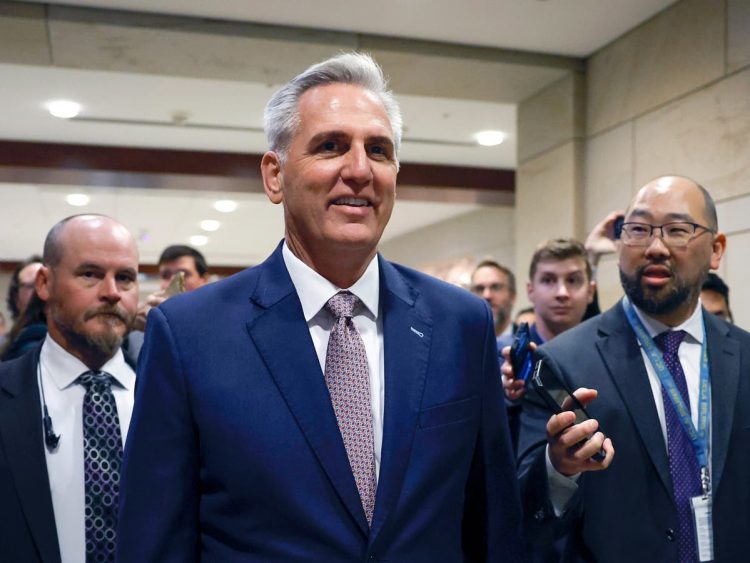 Get our free Inside Washington email

Republicans are projected to win a slim majority in the US House of Representatives with 218 seats, giving the GOP control of the lower chamber of Congress.

Current House minority leader Kevin McCarthy has already cleared the first hurdle toward being elected House Speaker by winning the nomination from members of his party by a vote of 188 to 31.

He now faces a weeks-long battle to quell right-wing objections likely by offering concessions to the far-right Freedom Caucus.

Meanwhile, Democrats are set to retain control of the Senate, securing 50 seats already with hopes of retaining another in a runoff in Georgia next month. Many Senate Republicans have criticised their leader, Mitch McConnell, since the election, but others have blamed Donald Trump for their failure to retake the upper chamber.

The Kentucky Republican was re-elected to his minority leadership role on Wednesday.

Far-right figures lay into Trump after 2024 campaign launch: ‘Shut the f*** up’

Some of Donald Trump’s most vocal – and most infamous – supporters are making clear they are decidedly not on board with his decision to launch a third presidential campaign after the disgraced ex-president announced his 2024 bid last night.

Right-wing commentator Ann Coulter told him “you had your chance, with a Republican House and Senate.”

If Donald Trump is to win the presidency once more after having suffered defeat to Joe Biden in 2020, he will be in very singular company indeed – that of Grover Cleveland.

Cleveland, who served as the 22nd and 24th president of the US, is the only person to have successfully won two non-consecutive terms. Can Trump become the second?

The Independent’s Washington chief Eric Garcia speaks with Brendan Buck, who worked for Republican House Speakers John Boehner and Paul Ryan, to get a better idea what a thin majority means for Kevin McCarthy’s caucus.

In short: The GOP has a “brand problem”.

“And even though there was a lot of frustration with the direction of the country, they didn’t think Republicans were a safe place to go to steady the ship,” he said of midterm voters. “And that should cause us to take stock of how we talk about ourselves and how we present ourselves and what we’re – what our principles are. I don’t actually expect a whole lot of that reflection to take place.”

Congresswoman Karen Bass has beaten billionaire developer Rick Caruso in the race to become mayor of America’s second biggest city, according to a projection from the Associated Press. Ms Bass becomes the first woman and only the second African American to hold the post.

Mr Caruso, who spent more than $100m of his own money on his campaign, had appeared to be making inroads into the veteran congresswoman’s lead in polls leading up to election day. But figures suggested she was on course to win with 53.1 per cent of the vote to his 46.9 per cent. The pair had clashed in debates on issues like the city’s homelessness crisis, crime and the cost of living.

Graeme Massie has the full story:

President Joe Biden congratulated Kevin McCarthy and House Republicans after the GOP won 218 seats in the House of Representatives.

“Last week’s elections demonstrated the strength and resilience of American democracy,” he said in a statement. “There was a strong rejection of election deniers, political violence, and intimidation. There was an emphatic statement that, in America, the will of the people prevails.” The president is “ready to work with House Republicans to deliver results for working families.” “In this election, voters spoke clearly about their concerns: the need to lower costs, protect the right to choose, and preserve our democracy,” he added. “As I said last week, the future is too promising to be trapped in political warfare. The American people want us to get things done for them. They want us to focus on the issues that matter to them and on making their lives better. And I will work with anyone – Republican or Democrat – willing to work with me to deliver results for them.”

Senate Minority Leader Mitch McConnell said would-be Republican voters saw “too much chaos” and “too much negativity” in GOP candidates in midterm elections, which saw Republicans gain a slim majority in the House while Democrats flipped a critical Senate seat and retained their majority in the upper chamber.

“We underperformed among voters who did not like President Biden’s performance, among independents and among moderate Republicans who looked at us and concluded too much chaos, too much negativity,” he said during a news conference on Wednesday.

“We turned off a lot of these centrist voters, which is why I never predicted a red wave to begin with,” he added.

The Kentucky senator spoke moments after his members voted to re-elect him to lead the caucus by a vote of 37-10. One member voted present.

When the 118th Congress convenes on 3 January, Republicans will control the House of Representatives for the first time in four years after meeting the required 218 seats necessary to form a majority in last week’s midterm elections.

The US Senate has voted 62-37 to advance a bill that would enshrine federal recognition of same-sex and interracial marriages.

The crucial procedural vote on 16 November follows the US Supreme Court’s reversal of constitutional protections for the right to an abortion, raising fears among civil rights groups and LGBT+ advocates that conservative justices would invite challenge to marriage equality and other rights previously defended by the court.

A final vote on the bill could come as early as Thursday.

Following three hours of carefully counting each vote, election officials revealed that a key race in New Hampshire’s House of Representatives has ended in a tie.

The legislative body is by far the largest in country with a whopping 400 seats. Extremely close elections in the state are hinging on roughly 30 hand recounts that currently underway.

Only one vote spearated the Republican and Democratic candidates in the race for Strafford County’s 8th District seat.

Following the recount, results showed that they each received 970 votes.

While John Fetterman was a candidate for US Senate in Pennsylvania, he faced regular attacks from Fox News for his tried and true outfit of a hoodie and basketball shorts.

Now that he’s arrived in the Senate, preparing to take office after the new year, they’re not too happy with him in a suit either.

How the ring-wing media giant is covering the arrival of the Democratic senator-elect:

For SMBs, Microsoft offers a new layer of server protection