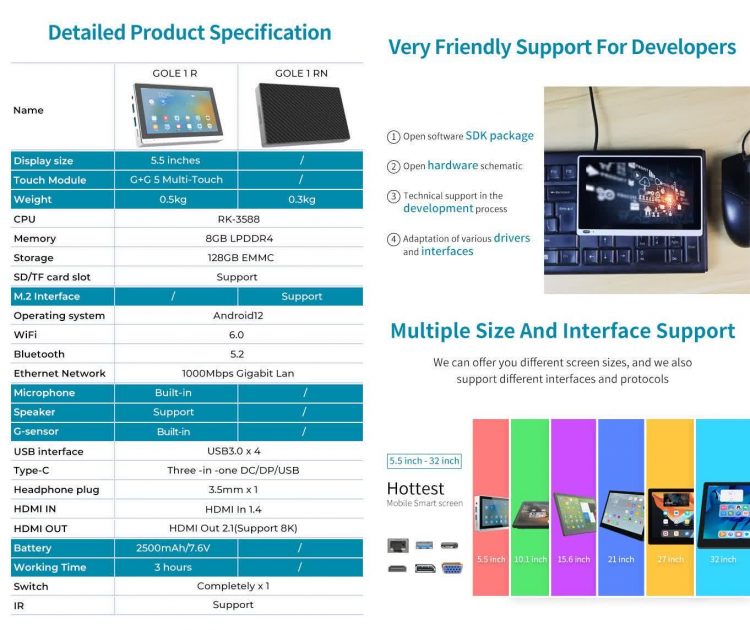 WTF?! Android-based miniature PCs have existed for a while, but Higole recently announced an odd example that straddles multiple device classes with impressive media output capabilities. If its Kickstarter campaign succeeds, the GOLE 1 R could be a versatile compact hybrid system.

Shenzhen company Higole recently launched a Kickstarter campaign for an Android 12 mini-PC that includes, among other things, a touch screen and HDMI 2.1 output for playing Ultra HD media. With almost a month to go, the company plans to offer the device for around $350 if the campaign succeeds.

The 8K Ultra HD label on top of the GOLE 1 R’s 5.5-inch IPS touch screen in the Kickstarter page art is misleading, but the machine still boasts impressive media capabilities. Higole hasn’t revealed the screen’s resolution, but it isn’t 8K.

Instead, the 8K media-playing functionality the device boasts comes from its HDMI 2.1 output which lets it decode and play video at up to 8K on external displays. HDMI 2.1 is still relatively rare, especially for something not quite as diminutive as a smartphone.

The GOLE 1 R also includes an HDMI 1.4 input, allowing it to act as an external display for other devices. Higole plans to eventually offer versions of the hybrid tablet with screens at 10.1, 15.6, 21, 27, and 32 inches. The Kickstarter campaign also lists a $300 GOLE 1 RN with no screen or battery for users who merely want a mini-PC.

Under the hood, the GOLE 1 R packs a 2.4GHz RK-3588 processor, 8GB of LPDDR4 RAM, 128GB of EMCC storage with a MicroSD card reader, a gigabit ethernet port, speakers, a microphone, Wi-Fi 6, Bluetooth, and a 3.5mm headphone jack. The device’s five USB ports –one USB-C and four USB-A 3.0 –enable desktop PC use through a separate mouse and keyboard. Regarding software, the machine ships with Android 12 but allows users to install RTLinux or Ubuntu.

Higole advertises the GOLE 1 R as a multi-purpose device. Users might connect it to professional-grade cameras, employ it as a compact UHD home theater device, use its desktop functionality for software development, or play Android games. One video depicts a user operating touchscreen controls to simultaneously play a game on the device while connected to a monitor. The USB and Bluetooth also support traditional gamepads.

These Haptic Gloves for the Metaverse Require ‘Airpack,’ Cost $495 Per Month