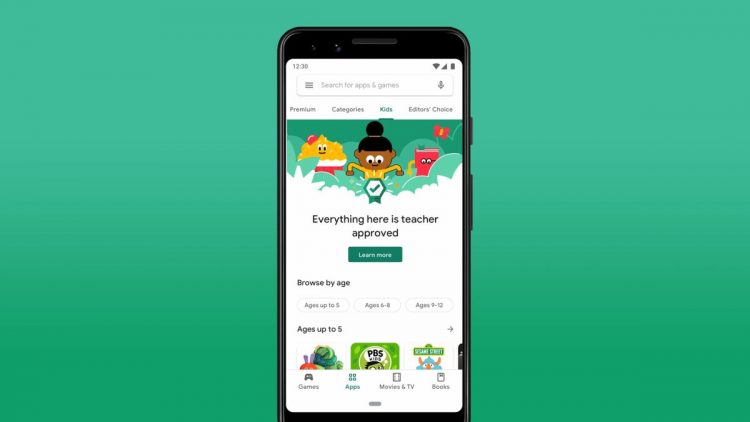 Google Play today announced a series of changes to its programs and policies around apps designed for children. The company is describing the update as an expansion of its previously launched “Teacher Approved” program, which includes a review process where teachers and experts vetted apps not just for safety and security elements, but for educational quality and other factors. The newly revamped policies will now impact how apps qualify for this program, which allows apps to gain entry to the Play Store’s “Kids” tab.

These changes should help to streamline some of the policies around apps made for children which, in turn, will increase the number of apps that become eligible to be reviewed for the Teacher Approved program. In addition, these policy updates and other changes will push Android app makers to come into compliance with stricter regulations and laws around software targeting children.

App developers were required to participate in Google’s “Designed for Families” program if their app was aimed at children, and could optionally choose to participate in the program if their app targeted both kids and older users. The Designed for Families program included a number of requirements around the app’s content, its functionality, use of ads, data practices, use of warning labels, feature set, underlying technology components, and more.

Any apps in this program were also eligible to be rated for the Teacher Approved program, which had stricter guidelines, but entry was not guaranteed.

Now, the additional policy requirements for the Designed for Families program are being rolled into the Play Store’s broader Families Policy. This latter set of guidelines requires apps to comply with applicable laws and regulations relating to children, like the U.S. Children’s Online Privacy Protection Act (COPPA), and the E.U. General Data Protection Regulation (GDPR), for example. The Families Policy also prohibits access to precise location data, prevents developers from transmitting device identifiers from children, and includes additional privacy and content restrictions, among other things.

For developers, the merging of the Designed for Families requirements into the Google Play Families Policy simplifies and strengthens the rules for developers around apps that target kids. And, with this change, all the apps that meet the now more robust Families Policy will become eligible to apply for the Teacher Approved program.

The Teacher Approved program’s requirements are not changing, however, and only a subset of apps meeting the overarching Families Policy will qualify.

The Teacher Approved program itself first arrived in April 2020 — at the beginning of the Covid-19 pandemic and lockdowns. At this time, many schools had shifted to virtual learning, and children were spending more time on their devices to both learn and be entertained. Beyond meeting safety requirements and government regulations, the apps chosen for “Teacher Approved” were vetted by a panel of academic experts including more than 200 U.S. teachers.

The panel rated the apps on various aspects like age-appropriateness, quality of experience, enrichment, and whether kids enjoy using the app, among other things. This information would then be displayed on the app’s Play Store listing if the app was approved so parents could determine if the app was right for their child.

Consumers can find these Teacher Approved apps on the “Kids” tab of the Play Store or they can look for the Teacher Approved badge on an individual app’s listing. With the update, all apps that are compliant with the Families Policy will also soon receive an additional badge that’s displayed in the Data safety section of their app’s listing. This badge will indicate the app has committed to the Play Store’s Families Policy.

In addition to the merging of its two families policies, Google also noted it recently updated its Families Self-Certified Ads SDK Program. Makers of SDKs (software development kits, or software used by developers to expand the functionality of their apps), must now identify which versions of their SDKs are appropriate for use in Families apps.

In 2023, Android app developers in the Families program will be required to use only the SDKs that are identified as appropriate — though Google suggests developers start to make the shift to these safer SDKs now.

These changes aren’t just about serving developers or consumers — they also help Google to meet stricter regulations being considered, drafted, and enacted worldwide around how software is permitted to handle kids’ data — such as the EU’s GDPR and the U.K.’s Age Appropriate Design Code. Failure to meet these requirements can result in significant penalties, as Meta recently learned when it was fined roughly $400 million for how it treated children’s data on Instagram.