Xiaomi Mix Fold 2 is set to be launched on August 11, check out the expected specifications- Technology News, Firstpost 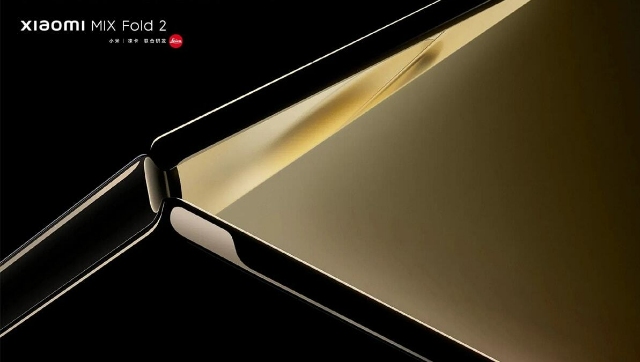 Right after Samsung unveiled their range of foldable devices for the year 2022, Xiaomi announced that they too will be unveiling one of the most anticipated devices from their camp.

Xiaomi is planning to launch the Mix Fold 2 in its home country, China. The leaks around the device have been trickling in for quite some time, although there was no official confirmation or images of the device up until recently. Well, Xiaomi finally teased the Mix Fold 2 in a poster.

The official teaser posted shared by the company confirms that the Mix Fold 2 will be launched on August 11. The poster image also reveals that the device will feature a design that seems to be inspired by the Samsung Galaxy Z Fold, with a hinge in the middle of the display.

The company is also planning to launch a number of other devices like the Buds 4 Pro and the Pad 5 Pro which come with a 12.4-inch display. The launch event is confirmed to kick off at 7 PM local time in China.

Xiaomi Mix Fold 2 Specifications:
The Xiaomi Mix Fold 2 is expected to have a 6.56-inch E5 AMOLED display for the exterior display, which has been made by Samsung. It will have an aspect ration of 21:9 and Full-HD+ resolution. It will also support a 120Hz refresh rate.

It will also be equipped with an 8.02-inch Samsung Eco2 OLED display on the interior, which features a 2.5K resolution and 120Hz refresh rate. It will have ultra-thin glass and a selfie camera hidden behind the display.

Powering the Mix Fold 2 will be a Qualcomm Snapdragon 8+ Gen 1 SoC, which will be paired with up to 12GB of RAM, and 1TB of internal storage,

A leaked render of the foldable phone also reveals that the Mix Fold 2 will come with a triple camera setup at the rear. The smartphone is said to include Leica’s branding on the triple camera setup. The primary shooter in the rear camera setup uses a 50MP Sony IMX766 sensor that has been calibrated by Xiaomi and Leica together.

As for the battery, the Mix Fold 2 will have a 4,500mAh battery and 67W fast charging capabilities. Additionally, it will feature wireless charging. On the software front, it will first boot into the MIUI 13 custom skin over the Android 12 OS. Right now, there are no indications that the device will be launched outside China. However, given that the Chinese smartphone market has seen its numbers dwindle, there is a strong possibility that Xiaomi may release the device in other markets as well. Whether the device comes to India, remains to be seen.

Microsoft Ignite in the rear-view mirror: What we learned