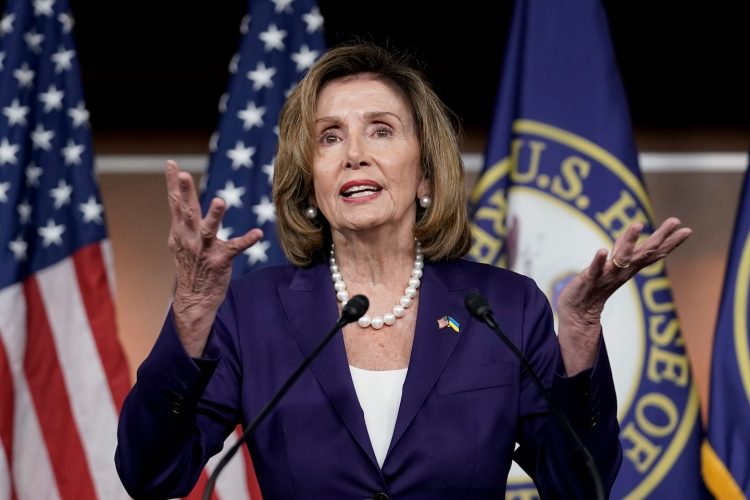 The White House warned Monday that an expected visit to Taiwan by House Speaker Nancy Pelosi (D-Calif.) could prompt China to take significant inflammatory actions in response, and urged Beijing not to take advantage of the trip or see it as a pretext for provocation.

“China appears to be positioning itself to take further steps in the coming days and perhaps over longer time horizons,” White House spokesman John Kirby said. He added: “Nothing about this potential visit — which, oh, by the way, has precedent — would change the status quo.”

Kirby did not confirm that Pelosi plans to stop in Taiwan, but his extensive comments to reporters suggested the White House is positioning itself for such a visit. Biden administration officials have said privately they have deep concerns about the timing of her expected trip, but on Monday, Kirby focused on criticizing China for overreacting.

Pelosi launched her trip to Asia on Sunday without disclosing whether Taiwan is on the itinerary. Meanwhile, Beijing has warned that it would retaliate if she visits, and an official Chinese statement warned the Biden administration against “playing with fire” on Taiwan.

Secretary of State Antony Blinken on Aug. 1 called on China not to escalate tensions in the event of a visit to Taiwan by House Speaker Nancy Pelosi (D-Calif.) (Video: Reuters)

That statement followed a more than two-hour call between Biden and Chinese President Xi Jinping on Thursday. During that call, Biden “made very clear that Congress is an independent branch of government and Speaker Pelosi makes her own decisions,” Kirby said.

Despite its fears that Pelosi’s trip could trigger a crisis in the Taiwan Strait, the White House has sought to avoid any impression that the president is pressuring Pelosi. And Kirby emphasized that if she did visit the island, that did not reflect any change in the U.S. approach to China or Taiwan.

Kirby laid out potential responses by China in response to a Pelosi visit, noting that China conducted a live-fire exercise over the weekend. Kirby added China could fire missiles into the Taiwan Strait or around Taiwan or conduct “highly publicized” military exercises. Or, he said, it could carry out operations that “break historical norms” such as sending larger numbers of military jets across the midpoint separating Taiwan from mainland China.

Responses “could also include actions in the diplomatic and economic space such as further spurious legal claims like Beijing’s public assertions last month that the Taiwan Strait is not an international waterway,” Kirby said.

China’s claims over Taiwan form a core part of the ideology of the ruling Communist Party. Beijing sees official visits by high-ranking foreigners as lending support to pro-independence camps and giving credence to the idea of Taiwan as a sovereign nation. Pelosi would be the first House speaker to travel to the self-governed democratic island since Rep. Newt Gingrich (R-Ga.) in 1997.

The visit also would test Xi’s resolve at a time when he cannot afford to look weak, as he presides over a slowing economy and worsening relations between China and the West. And it comes ahead of a crucial party congress in the fall, when Xi is expected to break with precedent and take on a third term.

All of the senior members of Biden’s national security team thought there were concerns about the timing of the trip, said a White House official, who requested anonymity to discuss sensitive matters. National security adviser Jake Sullivan, for instance, expressed concern to multiple administration officials and asked for suggestions on how to dissuade the speaker from traveling to Taiwan, even dispatching some officials to speak directly with Pelosi, according to two people familiar with the conversations.

The White House official said Sullivan was not more concerned than others, and like other officials agreed it was Pelosi’s decision whether she wanted to go. Sullivan “assertively defended [Pelosi’s] right to go” in a call with his counterpart in China, the official said.

Zack Cooper, a senior fellow with the American Enterprise Institute, said Washington does not want a major confrontation, “but if the Chinese intentionally take action or if there’s some sort of accident that leads to a real clash — if ships or aircraft touch each other, or if you get a radar lock on an aircraft or a missile that flies very close over Taiwan — I think that you’d see that the United States feels it has to respond quite forcefully to that.”

And Beijing’s responses are not likely to end when Pelosi leaves Taiwan, he said, but would probably continue in the lead-up to the party congress. “I think this is not going to be an isolated incident,” Cooper said. “I think we’ll see more actions over the next several months.”

Matt Turpin, a Hoover Institution visiting fellow who served as White House China director in the Donald Trump administration, said China’s leaders, not Pelosi, would be responsible for any escalation.

“Pelosi’s visit is not driving Beijing’s behavior,” he said. “This is what they’re choosing to do. They will use whatever pretext they need to use to accomplish their plan — the eventual annexation of Taiwan.”

In his call with Biden last week, Xi called on Washington to abide by its one-China policy, a long-standing agreement in which the United States acknowledges — without recognizing — Beijing’s claim that there is only one China.

c She visited Tiananmen Square in 1991 early in her career, where she unfurled a banner honoring those who died after a brutal crackdown by the Chinese government on protests there. Police chased Pelosi and the lawmakers traveling with her out of the square.

But members of both parties, including Republican members of Congress, have asserted that China has no right to dictate where U.S. officials can travel.

Rep. Michael McCaul (R-Tex.) was invited to travel with Pelosi several weeks ago and at the time, the plan was to also visit Taiwan, said his spokeswoman Leslie Shedd. He was unable to visit because of a prior commitment, Shedd said, so his office does not know what the final plan was.

“He also believes the Speaker — or any other American official — should be able to visit Taiwan if they would like to,” Shedd said in a statement.

Pelosi announces Asia trip itinerary with no mention of Taiwan

Pelosi and the lawmakers traveling with her have been briefed on the threat possibilities related to the trip and the intelligence community’s understanding of the risks of escalation with Beijing, according to people familiar with the visit.

Pelosi began her tour of Asia on Sunday with planned visits to Singapore, Malaysia, South Korea and Japan. In a statement ahead of the trip, her office did not mention Taiwan. Pelosi had planned to lead a congressional delegation to Taiwan in April but delayed the journey after contracting the coronavirus.

For decades, China has tried to force Taiwan into diplomatic isolation by picking off its allies and launching vociferous campaigns against any semblance of recognition of Taiwan as a nation, including visits by foreign dignitaries.

Beijing has repeatedly said it will use force if necessary to “reunify” Taiwan and its 23 million people with the motherland. Taiwan, however, has never been ruled by the Chinese Communist Party, and its people have shown no interest in being ruled by their authoritarian neighbor.

Since the election of Taiwanese President Tsai Ing-wen of the independence-leaning Democratic Progressive Party, Beijing has ramped up its rhetoric and military threats. Last year, the Chinese air force repeatedly broke daily records for the number of fighter jets it sent near Taiwan’s airspace.

On Saturday, the People’s Liberation Army held “live-fire exercises” off the Chinese coast opposite Taiwan, near the Pingtan islands, according to a notice from the Pingtan Maritime Safety Administration. On Monday, maritime officials announced further drills in the South China Sea between Tuesday and Saturday.

The Biden administration has grown increasingly concerned about the risk of a full-blown crisis in the Taiwan Strait. U.S.-China relations are already at a low point, as the two superpowers collide over everything from economic power to human rights to military influence, and a conflict between China and Taiwan could draw in other powers, including Japan.

Following Russia’s invasion of Ukraine, an unofficial U.S. delegation of former defense and national security officials traveled to Taiwan in a show of Washington’s “rock solid” commitment to the island’s defense.

Increased engagement between U.S. officials and Taipei has led Beijing to worry that Washington has taken steps to change the status quo. Fueling that sense are apparently off-the-cuff statements by Biden that depart from Washington’s policy of “strategic ambiguity” over defense of Taiwan. On three occasions since August, Biden has suggested the United States would defend Taiwan militarily if attacked by China. “Yes,” he said in May, “that’s the commitment we made.” Each time the White House has either walked back or watered down the comments.

During the last Taiwan Strait crisis in 1995-1996, China launched missiles that landed near Taiwan and the United States sent two aircraft carriers into the region east of Taiwan, said Evan Medeiros, an Asia studies professor at Georgetown University. But the Chinese military was much less capable then “so there was little risk of escalation,” he said.

“This crisis is playing out with a vastly more capable Chinese military and a more confident and frustrated leadership,” said Medeiros, who served as a senior China official in the Barack Obama administration and was in the unofficial delegation to Taipei in March. “So the core challenges for the United States will be crisis management and escalation control.”

John Hudson contributed to this report.

If it ain’t broke, don’t fix it- Technology News, Firstpost