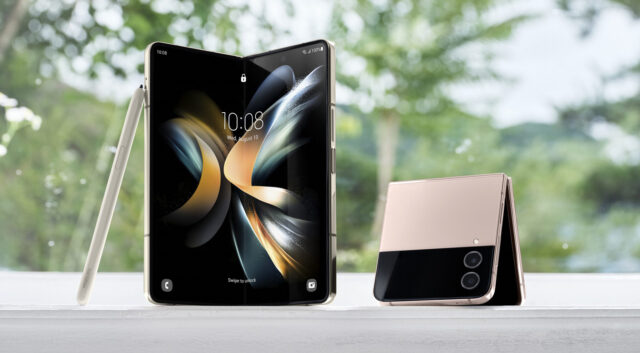 Samsung has been talking up its success in foldables over the past few weeks, and the timing wasn’t random — Samsung was building hype for today’s event in which it unveiled its fourth-gen foldables, plus new watches and earbuds. The frequently leaked Galaxy Z Fold4 and Z Flip4 are now official, but that’s not all. Samsung also announced its latest Wear OS-powered smartwatches, the Galaxy Watch5 and 5 Pro, as well as some new earbuds. You can pre-order all the new devices today with some limited-time bonuses.

The new foldables are not a revolution, but rather an evolution of the third-gen devices. The Z Flip4 is Samsung’s take on the flip phones of yore. On the outside, there’s a 1.9-inch OLED display that can show you notifications, NFC payment info, and even full (but tiny) apps. Open it up, and you have an expansive 6.7-inch foldable OLED display at 2640 x 1080 resolution. Samsung says the hinge and bezels are slimmed down on this model, too. It’s powered by the Snapdragon 8+ Gen 1 and 8GB of RAM. This phone starts at $1,000, just like its predecessor.

The Fold4 is Samsung’s ultra-premium foldable and the most expensive phone it sells in any product line, with a starting price of $1,800. Like its smaller sibling, this phone looks almost the same as last year’s version, but the external 6.2-inch cover display and internal 7.6-inch foldable panel are slightly wider than the Fold3’s. The flexible OLED on this phone and the Flip4 are apparently 45 percent stronger than last year’s models.

The Fold4’s cameras got an upgrade, as well. There isn’t room for the fantastic camera array from the S22 Ultra, but Samsung did manage to replicate the base S22’s camera setup with 50MP primary, 10MP 3x telephoto, and 12MP ultrawide sensors. The Fold4 has front-facing cameras on both the cover and main displays (10MP and 4MP, respectively). The internal one is under the OLED panel, and Samsung claims it’s less noticeable than the Fold3’s under-display camera. It has the same Snapdragon 8+ Gen 1 chip inside, but it comes with 12GB of RAM.

Samsung has almost single-handedly saved Google’s Wear OS from extinction with the Watch4, and in return, Google gave the company exclusive access to Wear OS 3. Other watchmakers are finally getting access to the new software, but Samsung is ready with the second iteration of its Android-powered Galaxy Watches. If you are a fan of the rotating bezel, there’s some bad news — that’s not an option on the new watches. Both the Watch5 and Watch5 Pro have a touch bezel, but they do have larger batteries this time around. That should address one of the primary complaints about the Watch4. Both watches have a new body temperature sensor and stronger sapphire glass like the Apple Watch. The regular Watch5 is aluminum, but the Watch5 Pro ups the ante with titanium. That also adds substantially to the price. The regular watch starts at $280, but the Pro will be $450 and it only comes in a 45mm case size. The Watch5 has 40 and 44mm size options.

Lastly, Samsung has a fancy new accessory for its foldables: the Galaxy Buds 2 Pro. These premium earbuds retail for $230, but they’re 15 percent smaller than the last-gen Buds Pro. They also support 24-bit hi-fi audio over Bluetooth, and redesigned vent holes should make them more comfortable for extended use.

All of Samsung’s new hardware is available for pre-order today. If you’re sold, ordering early is your best bet. Not only will delivery timelines be pushed back, but you’ll get enhanced trade-in values for your old phone, watches, tablets, and whatever else you want to throw at Samsung to bring down those lofty foldable prices.

How to Combine PDF Files in Windows 11/10

You Might Be Eligible for a Free Smart Thermostat