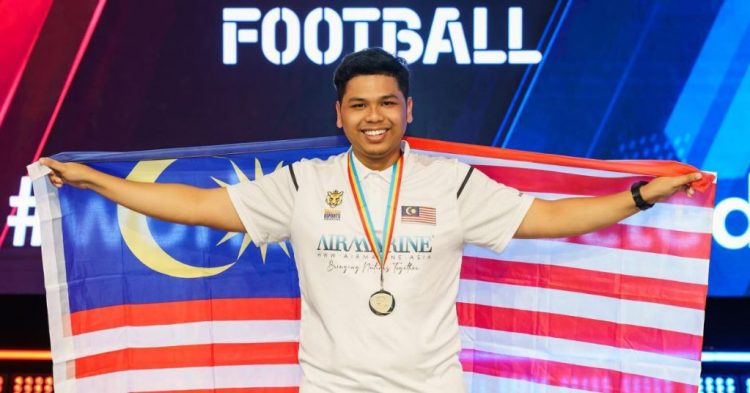 The inaugural Commonwealth Esports Championships (CEC) have just taken place over the weekend on August 6 and 7.

Malaysia sent three squads to Birmingham to take part in it—one eFootball athlete and two Dota 2 teams (one for the open category and one, in the women’s category).

Malaysia all but dominated, placing first in all three categories in the first-ever CEC. Here are the Malaysians who are bringing home the gold and the glory.

He shoots, he scores

The victory was led by Mohamad Nor Haikal Mohamad Noh (Haikal). The eFootball athlete represented the Malaysian Super League champions, Johor Darul Ta’zim, in the game.

On August 6, Haikal beat out Gary McInnes, a Scottish player, in two out of three matches, thus securing his gold medal.

According to an article by What’s The Meta, Haikal has quite the list of accolades as an eFootball athlete. He was a 2018 Asian Games semi-finalist and was the first Malaysian player to play in the Thai League, Toyota E-League Pro 2019.

“I am so happy, this is my dream,” Haikal said in an article by Global Esports Federation. “I have been waiting for this for years. It means so much to the people back home, lots of people are watching online, and I can hear all the messages coming in for me already.”

Malaysia’s female team for DOTA 2 had played spectacularly in the qualifiers, winning every single match they were in.

Together, the team beat the delegates from Singapore, Wales, Australia, and England during the group stage. For the semi-finals, they faced Singapore once again.

“The ever-familiar matchup against our sister team,” tweeted Tiffani “Oling” Lim, the manager and substitute player of the women’s team.

“We’ve been teammates with one another at different points in time, and we know each other too well. May the best team win!”

This time, the team that emerged as winners were the Malaysian delegates, securing a spot on the podium.

In the Grand Finals, the team met the English team again, whom they beat in two games. This means that not a single game or match was lost by the Malaysian women throughout the CEC.

“Incredibly proud to be carrying the Jalur Gemilang,” the team shared on Facebook upon their final win.

Like the women’s team, the Malaysian athletes made it to the Grand Finals to face England. The Malaysian team won the first game and lost the second, before finally securing the gold medal in the deciding game.

“The Malaysia fans in the crowd were brilliant,” team captain William said to Global Esports Federation. “It was like playing at home. I’d like to thank them for their support, it was so loud, and it really meant a lot.”

With the third and last gold, Malaysia topped the medal table at the CEC.

In statements to Global Esports Federation, it seems like the teams were asked why Malaysia is so good at games.

“What makes Malaysia so good at games?” Stephanie, the team captain of the women’s team had asked in return. “We have a lot of different cultures in our country but we come together very well, and that is our strength.”

William, on the other hand, said: “I have no idea what makes Malaysia so good at esports, but we must have a lot of talented players to do this.”

Congratulations to the athletes that participated in the CEC. We look forward to seeing what’s next for all the athletes, and hope the wins will encourage young e-athletes in Malaysia and beyond.

As technology evolves, obsolescence is a given