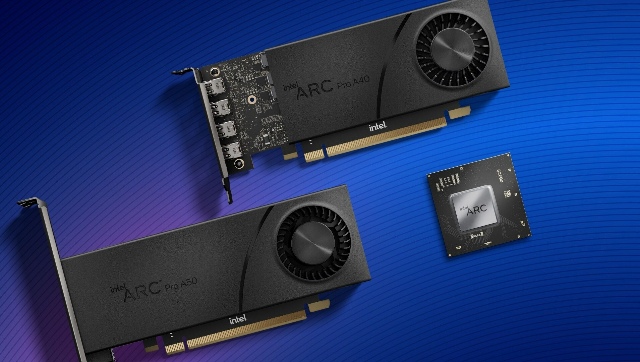 How Can I Get an Affordable Laptop?

All the new Arc Pro-A series graphics processing units have built-in ray tracing hardware, machine learning abilities, and AV1 hardware encoding acceleration, which is a first for the industry.

Intel is also targeting certifications with leading professional software applications within the architecture, engineering and construction, and design and manufacturing industries for their Arc Pro A-series graphics.

Intel Arc Pro GPUs are also optimised for media and entertainment applications like Blender and run the open-source libraries in the Intel one API Rendering Toolkit, which are widely adopted and integrated with industry-leading rendering tools.

The A30M mobile GPU features 3.5 teraflops of graphical performance, 8 ray tracing cores, and 4GB of GDDR6 VRAM. The card is designed to be used between 35 and 50 watts of peak power.

The Arc Pro A40 has a single-slot design, while the A50 has a dual-slot design.

Both the workstation graphics cards will include four Mini DisplayPorts for multi-monitor setups. Intel claims that the GPUs will support two monitors at 8K 60Hz, one at 5K 240Hz, two at 5K 120Hz, or four at 4K 60Hz.

While these cards will be able to run games, their primary function for is professional workloads.

When asked about when the GPUs will be available to users, Intel responded by saying, that the first Arc Pro A-series mobile product will be available this quarter and that the Arc Pro desktop products will start shipping from leading desktop ecosystem partners this year. Pricing for the desktop cards has not been revealed as of now, and will be revealed at a later date.

12 Best Games to Play On Your Chromebook

What Should I Buy: A Laptop or a PC?

The Best Laptop Stands of 2022