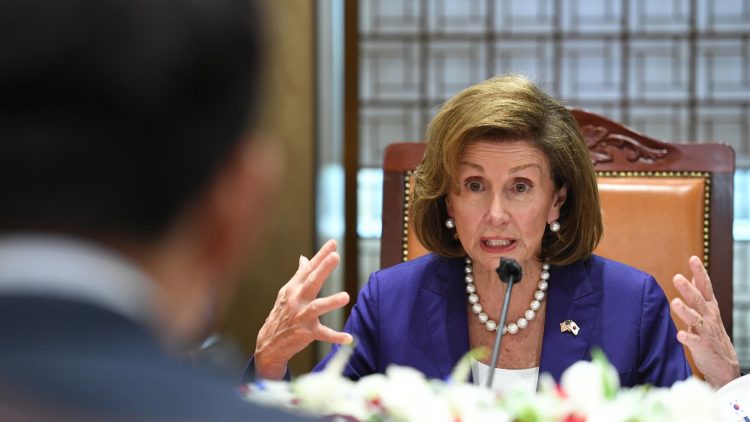 China on Friday imposed sanctions on U.S. House Speaker Nancy Pelosi and her immediate family in response to what the Foreign Ministry described as an “egregious provocation.”

Pelosi visited Taiwan earlier this week, in what was a highly controversial move. China views the island as part of its territory, but Taiwan has been governed independently since 1949, according to the Council on Foreign Relations.

China repeatedly voiced its opposition to Pelosi’s trip to the disputed island, but the U.S. official decided not to cancel her plans.

“In disregard of China’s grave concerns and firm opposition, Speaker of the U.S. House of Representatives Nancy Pelosi insisted on visiting China’s Taiwan region. This constitutes a gross interference in China’s internal affairs. It gravely undermines China’s sovereignty and territorial integrity, seriously tramples on the one-China principle, and severely threatens peace and stability across the Taiwan Strait,” a ministry spokesperson said in a statement.

“In response to Pelosi’s egregious provocation, China decides to adopt sanctions on Pelosi and her immediate family members in accordance with relevant laws of the People’s Republic of China,” they added.

The statement did not include specific details about the nature of the sanctions.

Political analysts have warned that Pelosi’s decision to visit Taiwan could ratchet up U.S.-China tensions. This relationship has been strained for years over issues such as Taiwan, the world economy and Russia’s invasion of Ukraine.

In a phone call last month, Chinese leader Xi Jinping told U.S. President Joe Biden not to “play with fire” over Taiwan. The White House said in a statement that U.S. policy had not changed and that it “strongly opposes unilateral efforts to change the status quo or undermine peace and stability across the Taiwan Strait.”

Pelosi is the highest-ranking U.S. official to visit the island in 25 years. Her trip also split positions among U.S. lawmakers, with some questioning the timing of the visit.

During the trip, which was part of a broader diplomatic journey through Asia, Pelosi said Taiwan is an emblem of democracy and a model for the region.

In another show of Beijing’s ire over Pelosi’s visit to Taiwan, China’s military has been conducting its largest-ever military drills near the island.

Taiwanese defense officials have said the exercises are “highly provocative” and added that they are monitoring the moves.