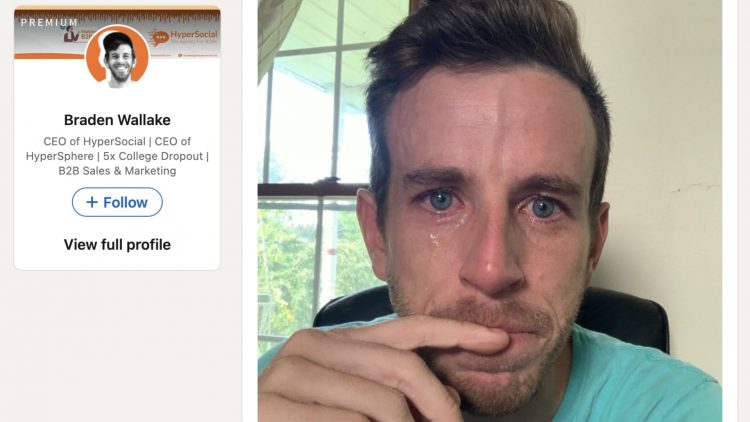 A CEO has sparked a major debate online after posting a selfie of himself crying on LinkedIn following layoffs he made at his company.

The post has since received more than 6,700 comments and nearly 33,000 reactions.

“This will be the most vulnerable thing I’ll ever share. I’ve gone back and forth whether to post this or not. We just had to layoff a few of our employees. I’ve seen a lot of layoffs over the last few weeks on LinkedIn. Most of those are due to the economy, or whatever other reason. Ours? My fault.” Wallake wrote alongside the picture that shows tears streaming down his face.

Wallake says he made a decision in February that eventually led to the layoffs. He has not yet explained what this decision was but said on LinkedIn that he planned to do so in the future.

Describing the layoffs as the “toughest thing” he has ever had to do, Wallake said he loved his employees and wished that he was “a business owner that was only money driven and didn’t care about who he hurt along the way.”

Some LinkedIn users mocked Wallake’s post, calling him “out of touch” and “cringe-worthy” or suggested that he should focus on helping his former employees rather than on how the situation had affected him.

“Please. Laying off people is horrific for you, but more horrific for them. It’s about taking care of their welfare, not griefposting for your own likes. This is ungracious, gratuitous, insensitive and tacky. Grow up, look after those people who you claim to be so worried about, own your mistakes privately and stop being so narcissistic,” one commenter wrote.

Others supported Wallake, saying they understood laying people off was an emotional process, and praised his openness.

This includes one of his former employees, Noah Smith, who defended his former boss and said he would only want to work for managers like him.

Wallake followed up his original message with a follow-up post, saying, “Hey everyone, yes, I am the crying CEO. No, my intent was not to make it about me or victimize myself. I am sorry it came across that way.”

“It was not my place to out the employees’ names publicly,” he continued. “What I want to do now, is try to make better of this situation and start a thread for people looking for work.”

Hypersocial was not immediately available to comment when contacted by CNBC.

“It’s a trend, CEOs and leaders have been encouraged to be authentic and bring their real selves to work,” Spicer said. “It’s showing your real emotions and real reactions and people are kind of encouraged to display this through a lot of current management thinking … so it’s not surprising.”

He added that Wallake appeared to be navigating a delicate balancing act between being too authentic and not authentic enough – sometimes referred to as bounded authenticity.

“So ideally, what this guy should have done is sort of used bounded authenticity, where he was a bit honest about the mistakes he’d made and he’ll admit to this, but then not turning it into a pity party about himself, basically.”