ACs, climate change, and the future of cooling tech 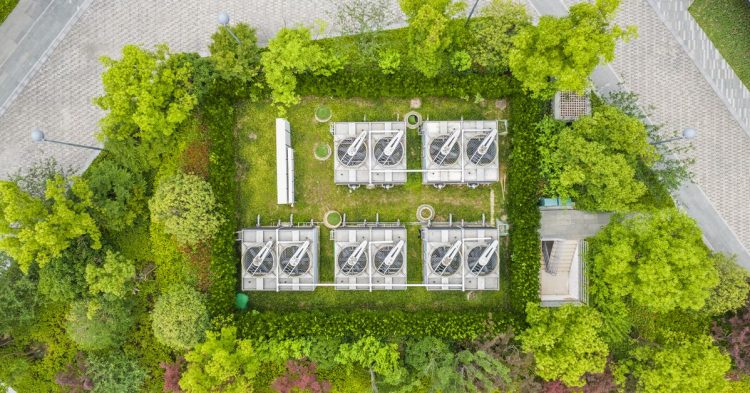 Amid a growing number of heat waves, air conditioners have become a lifeline. Because these appliances are critical to keeping people cool — and protecting them from dangerously hot weather — the International Energy Agency (IEA) estimates that there may be more than 5 billion air conditioners across the planet by 2050. The problem is that while air conditioners do keep people safe, they’re also a major contributor to climate change.

So why not rethink the AC entirely?

The basic science of air conditioners hasn’t changed much since they were first invented about a century ago, but these appliances have become a bigger and bigger threat to life on Earth. Most modern air conditioners consume a massive amount of energy, strain the electrical grid during sweltering summer days, and use harmful chemicals, called refrigerants, that trap heat in the atmosphere. That’s why, along with a vast number of other structural changes the world will need to make to fight climate change, some experts say it’s time to change how we cool our homes.

Discover how the digital world is changing — and changing us — with Recode’s weekly newsletter.

“We need to design our buildings in a way that consumes less energy. We need to insulate them better. We need to ventilate them better,” explained Ankit Kalanki, a manager at Third Derivative, a climate tech accelerator co-founded by the sustainability research organization RMI. “These strategies are very important. We can reduce the air conditioning demand in the first place, but we cannot eliminate that.”

The race to redesign the AC is already on. The IEA predicts that within the next three decades, two-thirds of the world’s homes could have air conditioners. About half of these units will be installed in just three countries: India, China, and Indonesia. The extent to which these new air conditioners will exacerbate climate change hinges on replacing the cooling tech we currently use with something better. Right now, ideas range from retrofitting our windows to more far-out concepts, like rooftop panels that reflect sunlight and emit heat into space. To succeed, however, the world will need to boost the efficiency of the appliances we already have — as quickly as possible — and invest in new tech that could avoid some of AC’s primary problems.

The AC’s noxious environmental impact stems from its core technology: vapor compression. This tech involves several components, but it generally works by converting a refrigerant that’s stored inside an AC from a liquid to a gas, which allows it to absorb heat, removing it from a room. Vapor compression uses an immense amount of electricity on the hottest days, and there are growing concerns that the technology might eventually overwhelm the grid’s capacity to provide power. And hydrofluorocarbons, the chemical refrigerants that many ACs use to soak up heat, are greenhouse gases that trap lots of heat in our atmosphere when leaked into the air. The challenge is that, for now, vapor compression ACs are still a critical tool during deadly heat waves, especially for high-risk populations, young children, older adults, and people with certain health conditions.

Technology to build cleaner, more efficient air conditioners does exist. Two major AC manufacturers, Daikin and Gree Electric Appliances, shared the top award at last year’s Global Cooling Prize, an international competition focused on designing climate-friendly AC tech. Both companies created ACs with higher internal performance that used less environmentally damaging refrigerants; the new units could reduce their impact on the climate by five times. These models aren’t yet on the market — Gree plans to start selling its prototype in 2025, and Daikin told Recode that it hopes to use the new technology in future products — but the IEA estimates that using more efficient ACs could cut cooling’s environmental impact by half.

Another strategy is to double down on heat pumps, which are air conditioners that also work in reverse, using vapor compression to absorb and move heat into a home, instead of releasing it outside. Heat pumps usually cost several thousand dollars, though the Inflation Reduction Act includes a proposal for a significant heat pump rebate, and President Joe Biden has invoked the Defense Production Act to ramp up production. Experts have argued installing heat pumps is critical to another important climate goal: transitioning away from fossil fuel-powered furnaces, which are an even bigger source of emissions than cooling. The holy grail of HVAC would be a heat pump that could provide both heating and cooling but isn’t dependent on vapor compression.

“Heat pumps are a critical technology in reducing our energy consumption, enhancing grid reliability and the utilization of renewable power, reducing emissions, reducing our reliance on foreign sources of energy, and lowering utility bills for US families and businesses,” Antonio Bouza, a technology manager at the Department of Energy, told Recode. The next step, he said, is reducing emissions even further by designing heat pumps that don’t rely on refrigerants, as current vapor compression systems do.

Another challenge, though, is that heat pumps are not the easiest appliance to install, especially for renters, who don’t necessarily have the money or ability to invest in bulky HVAC systems. To address this problem, a company called Gradient has designed a heat pump that easily slides over a windowsill — it doesn’t block light — and currently uses a refrigerant called R32, which is supposed to have a (comparatively) low global warming potential. Gradient recently won a contract to install its units in New York City public housing.

A fleet of new companies want to make even bigger changes to how we cool our homes. One of these startups is Blue Frontier, which is backed by Bill Gates’s investment fund, Breakthrough Energy Ventures, and plans to start selling its futuristic AC units in 2025. The company’s technology uses a specialized salt solution that can release water into the air — or draw it out — which allows the AC to control its temperature. This approach, Blue Frontier claims, can save up to 90 percent of the energy used by a traditional AC and avoids draining electricity from the grid during peak hours.

“By eliminating air conditioning that’s a problem for the grid, it allows the grid to actually reduce the costs of power production [and] utilize renewable energies in a more effective manner,” Daniel Betts, the CEO of the company, told Recode. “So not only do we save energy, but we are saving energy at the moments that are most critical.”

Scientists and startups are playing with other concepts, too. One path, which the company Transaera is taking, is to develop new materials that efficiently soak up moisture from the air, almost like a sponge, so that air conditioners can work more efficiently. A similar concept is to take advantage of solid-state technology. This idea would use solid materials to absorb heat, and some research on it has support from the US Department of Energy. The British firm Barocal is developing a type of plastic crystal that could do this and also help control temperature. One company, Phononic, has developed a solid-state core that could be integrated into existing HVAC systems. The company says its first commercial installation will be next year.

While many of these technological breakthroughs are promising, the movement to revolutionize air conditioning still faces some major challenges. Right now, AC manufacturers primarily focus on meeting minimum performance standards, rather than competing for higher levels of efficiency. Consumers also tend to buy air conditioners based on their sticker price, not an AC’s overall impact on their energy bills. And even though there are a growing number of AC-focused startups, the industry is still dominated by a small handful of large companies, all of which primarily focus on far-from-ideal vapor compression tech.

“We don’t install more efficient technologies unless we really need to, or it’s mandated by a government or another organization,” said Eli Goldstein, the co-founder and CEO of SkyCool, a startup developing tech that could be used to send heat from buildings and ACs into space. “Ultimately, the key is going to be dollar investments from both private and public enterprises to deploy the technologies.”

Other changes, like better insulating our homes and installing batteries throughout the grid, are still critical in the fight against climate change. However, all signs indicate that humans will continue to buy air conditioners, not just to feel comfortable but to survive increasingly devastating weather brought on by climate change. This is especially true as temperatures and incomes rise in some of the world’s largest countries and fastest-growing economies. In India alone, demand for cooling tech was already growing between 15 and 20 percent every year, as of 2020.

This surging demand creates a promising, but incredibly risky, situation. There’s the possibility that the growing need for cooling spurs a race to build the best AC technology and, ideally, tech that could also displace fossil fuel-based heating. But if better, more affordable AC doesn’t come to market fast enough — especially for the vast number of people in developing countries who will buy these appliances in the coming decades — significantly worse air conditioners will take their place, warming the planet even faster.

This story was first published in the Recode newsletter. Sign up here so you don’t miss the next one!

How to Restart a Roku