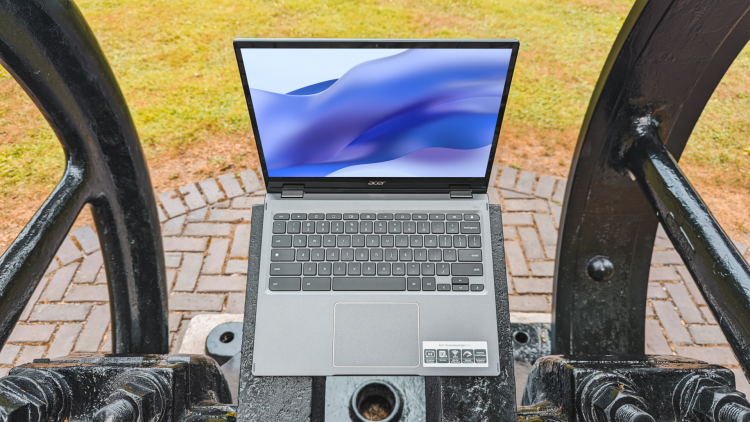 The Acer Chromebook Spin 513 (2H) is Acer’s mid-tier offering within its premium Chromebook lineup, slotting in before the Spin 713. The latter features a dedicated Intel CPU compared to the 513’s mobile CPU, only for this iteration, Acer swapped out the slower Qualcomm 7c mobile processor from the previous model for Mediatek’s octa-core Kompanio 1380. It also raised the asking price by over $200 for the base model, though its sole configuration does double the eMMc storage (128GB) and RAM (8GB).

The Acer Chromebook Spin 513 (2H) costs $615 and is currently sold through Amazon in North American markets. Acer is targeting this device toward students and “hybrid workers” who have both in-person and virtual components to their workflows. In the box, you’re getting the laptop, warranty guide, and a 45W USB-C charging brick that comes with an extension. It comes in a single gray color. 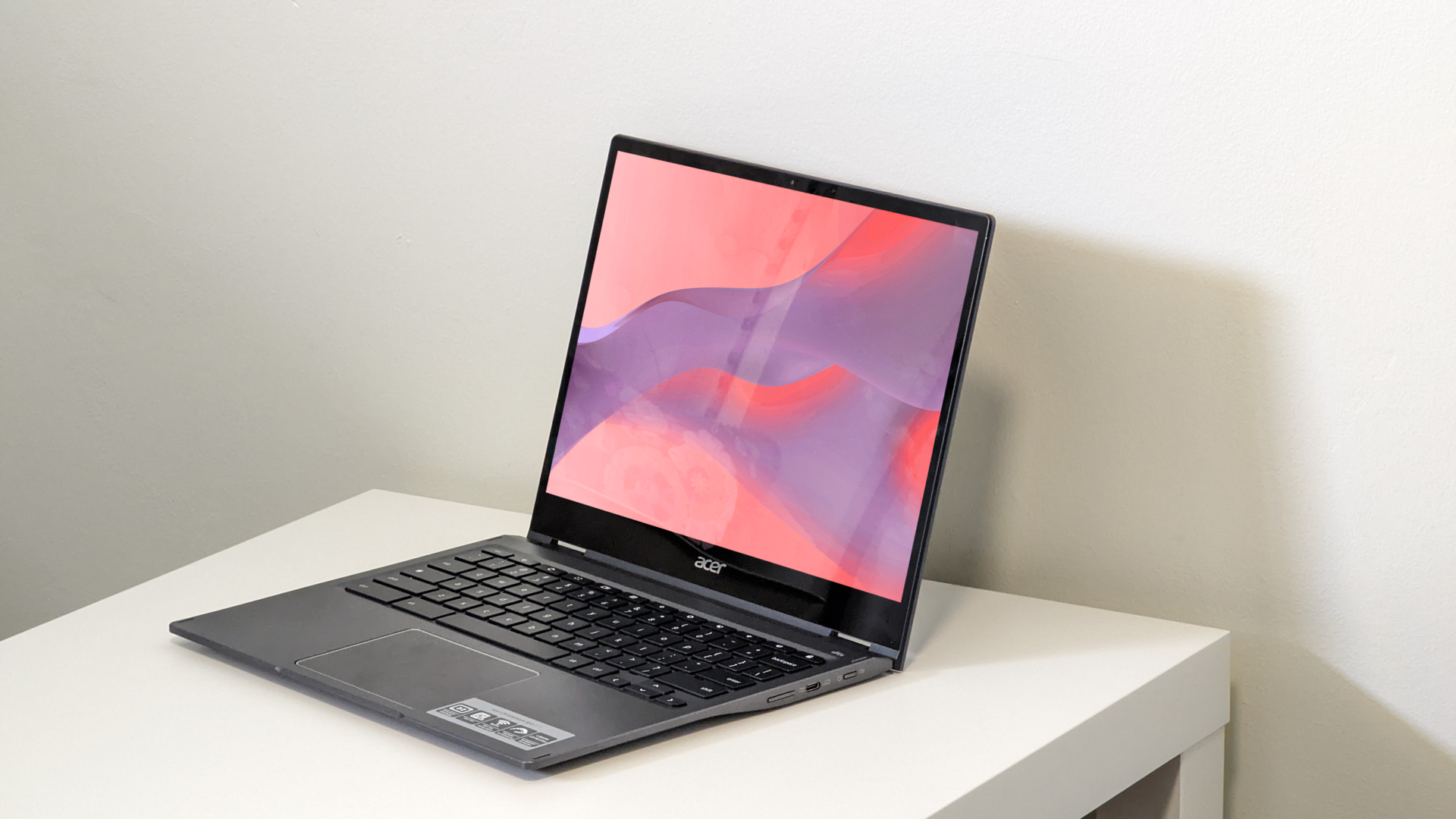 The Acer Chromebook Spin 513 (2H) is not a significant overhaul over its predecessor, but that’s a good thing. The Spin 513 (2H) keeps an excellent design and minimal profile. The laptop deck is plastic, but the company didn’t skimp on putting Gorilla Glass on both the screen and trackpad. The rest of the device, including the lid and bottom is made of aluminum.

The screen gets a decent overhaul this year, bumping up the resolution to 2K and delivering a higher peak brightness of 360 nits. The display has an aspect ratio of 3:2, which means it has more vertical space compared to the standard 16:9 aspect ratios you’d see in most computers. Compared to 2021’s Spin 513, you’re getting 18% more vertical screen real estate. This is great for editing documents, interacting with the display in tablet mode, and navigating Chrome OS. As well as touch, the display also supports stylus input. 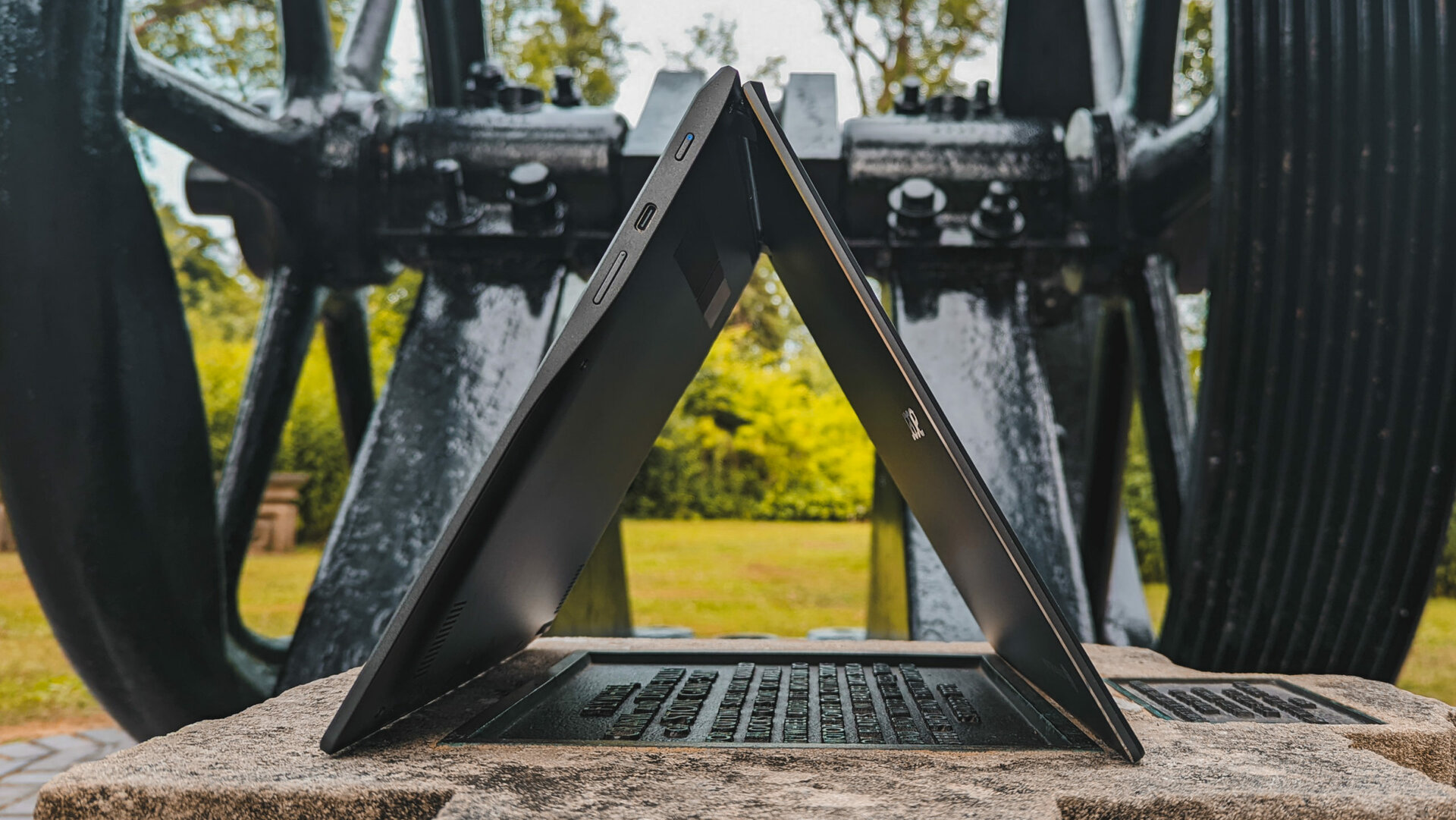 The 360-degree hinge design gives you a lot of options for actually using the display. The hinges provide an adequate level of stiffness to allow the screen to hold in multiple orientations including tablet mode, tent mode (pictured above), and the basic laptop mode. Like other articulating displays, this is great for students who may use a stylus to write or draw. When it comes to watching content, having the ability to hide the keyboard also makes the viewing experience much better.

Speaking of content consumption, the Spin 513’s speakers are also quite pleasant. They won’t beat out more expensive computers like a MacBook Air, but the two stereo speakers have DTS bass optimization and do a decent job at delivering full sound in such a slim form factor.

The 2-in-1 form factor of the Acer Spin 513 is an excellent choice for students who want to take full advantage of Chrome OS.

A similar case can be made for the keyboard, which provides an enjoyable typing experience compared to similarly priced Chromebooks. The keys have a decent amount of travel and are backlit, meaning you can type comfortably in dim lighting. In combination with the glass trackpad, inputs on the Spin 513 deliver a more premium feel than some other laptops at this price point, which typically don’t have the same accuracy or speed.

To round off the good stuff, let’s talk battery life. The Spin 513 (2H) has a quoted battery life of 11 hours compared to 13.5 hours of the previous generation. Though it’s less than its predecessor, in my testing of the device, I comfortably got about seven to eight hours of usage on a single charge at near max brightness. You can expect this type of runtime if you have multiple Chrome tabs going for web apps like Google Docs and Slides. With heavier workloads, you’ll want to bring a charger, but in typical day-to-day usage, the Spin 513 provides enough juice to get through a full day.

What’s not so good? 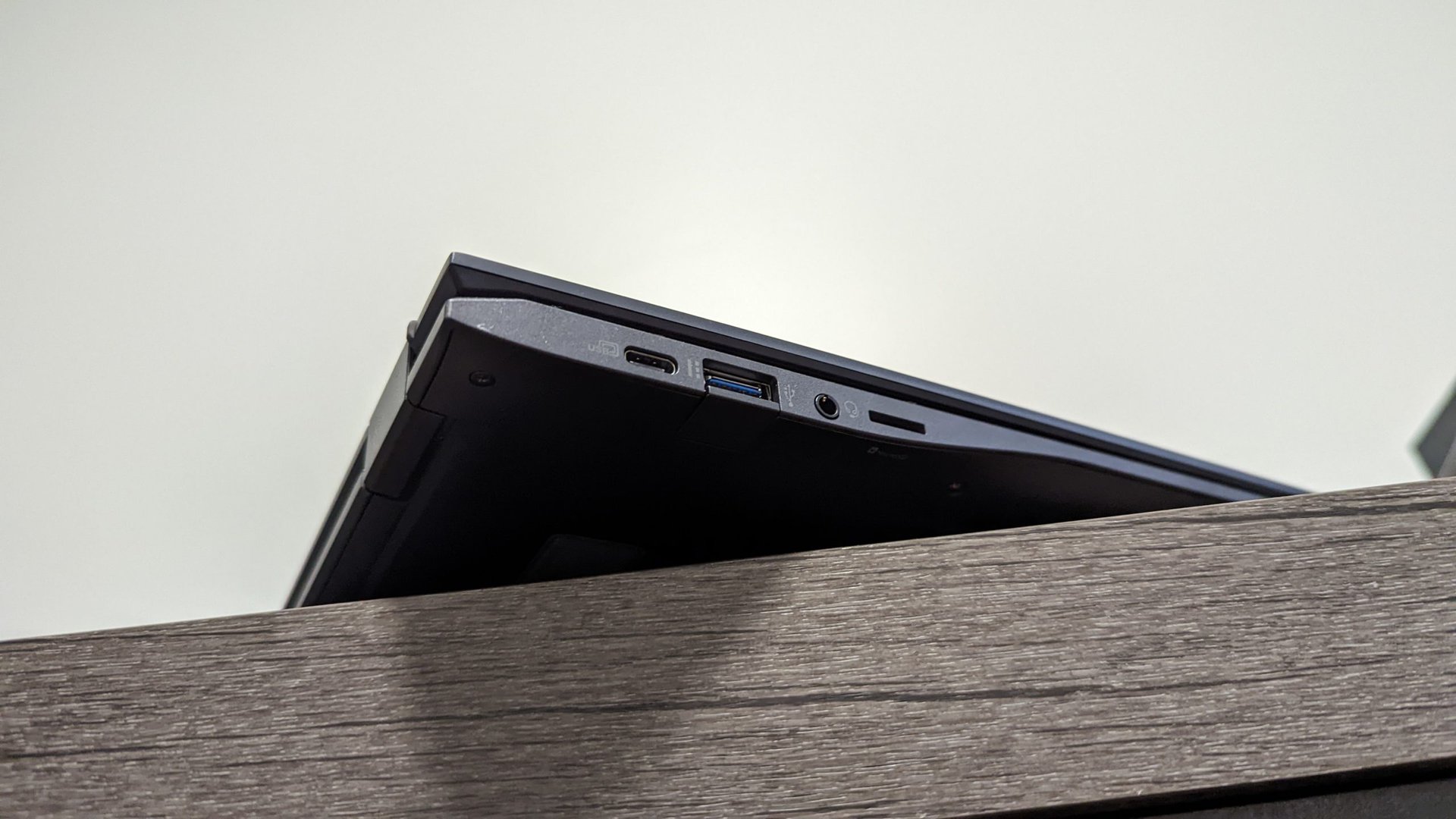 The Mediatek 1380 that powers the Spin 513 (2H) is a step up from the Snapdragon 7c processor on paper, but the performance is just… okay. It can handle most applications and Android apps via the Play Store, but it isn’t consistent with its delivery. My workflow generally consisted of having multiple documents, news articles, and Google Classroom open, with the addition of a couple of apps like Spotify and YouTube. With all this, I would get occasional lag and stutters; if you use it long enough, the ceiling for what this processor is capable of is reached quite easily. This, combined with the leisurely speed of the eMMC storage, makes the Spin 513 noticeably slow at times, but it all depends on how far you push it. To Acer’s credit, the company added 4GB of RAM compared to the last-gen model, so you get a higher ceiling for multi-tasking, but in scenarios like mine, it doesn’t yield much.

The port situation has also largely stayed the same. While the device supports the latest USB-C and USB-A gen 3.2 ports, it would’ve been nice to see the addition of older ports since this device is aimed at students who may not have access to USB-C-enabled devices. Ports such as an HDMI would greatly benefit many students and hybrid workers since many of the older projectors and external monitors found in schools and workplaces don’t support USB-C video output. Companies like Dell and Lenovo offer a more versatile port selection on their Chromebooks and Windows laptops at this price point.

Another gripe we had with 2021’s Spin 513 iteration was the sub-par HD webcam. This remains unchanged; the Spin 513 (2H)’s camera still has a 720p resolution. I think Acer again could have invested in upgrading the webcam to 1080p considering the prevalence of video calling at work and in education. That being said, most laptops in this price range fail to deliver adequate webcam quality, so this issue is part of a broader problem. You’ll want to buy a standalone webcam for a better experience. 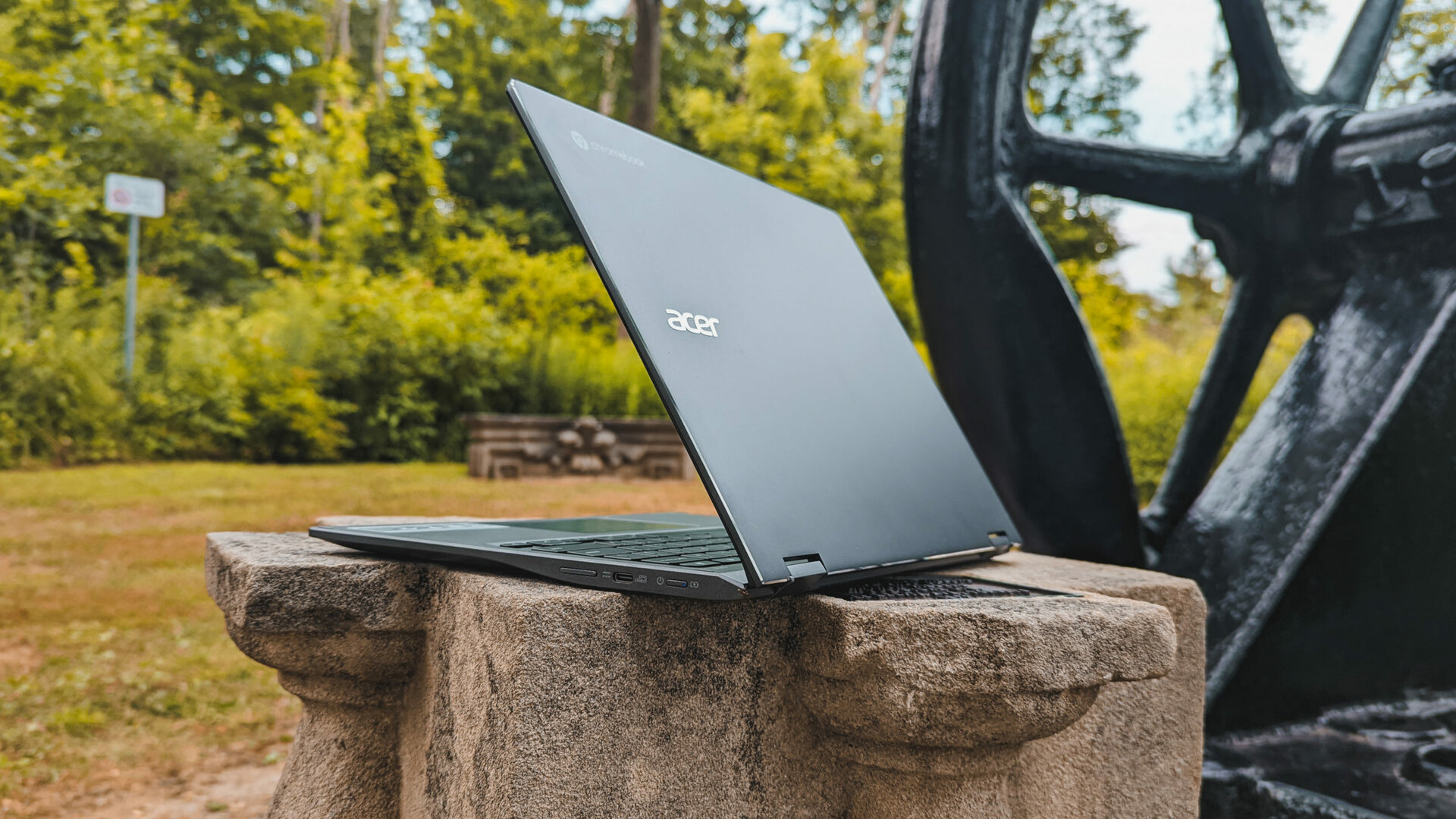 The Acer Chromebook Spin 513 (2H) is an interesting addition to Acer’s Chromebook lineup. The company focused on refining some of the computer’s key elements while keeping the general design language and form factor relatively similar.

The Spin 513 excels at delivering a well-balanced user experience; the updated screen with a higher resolution, and 3:2 aspect ratio is sure to be a welcome change for workers and students alike, as they’ll be able to utilize more vertical real estate for work and play. The articulating screen is also greatly versatile with its 360-degree hinge, allowing for content consumption, note-taking, drawing, and even some light gaming through the Google Play Store.

Other aspects like a responsive glass trackpad, a well-rounded keyboard, decent speakers, and close to all-day battery life make the Spin 513 an excellent choice for many people. I’d recommend it to a parent looking to get their middle-schooler or high school freshman a new laptop to start off the new school year.

However, considering the Spin 513 (2H) is more expensive than before, there are a couple of things you’d want to make sure of before spending your cash.

If your workflow consists of a lot of research-based tasks that may require you to multitask with multiple tabs and applications, it might be worth considering getting Acer’s higher-end Spin 714 Chromebook ($749), as the Intel-based processor will give you better performance for heavier workloads. While Acer has upgraded the Spin 513 to the Mediatek Kompanio 1380, I’d argue for many people it’s just not enough power if you plan on doing more than just casual browsing. With 8GB of RAM and slow eMMC flash storage, there’s definitely room to improve on the performance end. The low-resolution webcam, too, won’t appeal to those who do a lot of video meetings over Zoom or Google Meet.

All in all, if you’re considering Acer’s Chromebook Spin 513 (2H), chances are you’re looking for a Chromebook that can nail the fundamental aspects of a laptop well, without breaking the bank. If it’s all-day battery life and display quality you’re looking for, the Acer Chromebook Spin 513 delivers these key features in a slim and light form factor. If you want to save a few dollars though, consider whether the display and slight performance boost are enough of a justification for picking up the 2H variant over the Spin 513 (1H) (~$400-500), which at the time of this writing is still staying in the lineup at a reduced price. 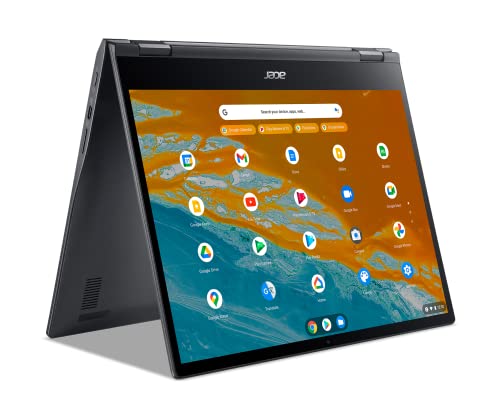 All-day battery with an excellent display • Durable and well-built

The Chromebook Spin 513 (2H) takes a familiar design and improves on it with a sharper, brighter display, improved specs, and all-day battery life.

Does the Acer Chromebook Spin 513 (2H) have a backlit keyboard?

Yes, the Acer Chromebook Spin 513 (2H) has a backlit keyboard.

Does the Acer Chromebook Spin 513 (2H) have a touchscreen?

Does the Acer Chromebook Spin 513 (2H) come with a stylus?

No, the Chromebook Spin 513 (2H) does not come with a stylus, but it does support stylus input.

How to Create a Group Calendar in Microsoft 365