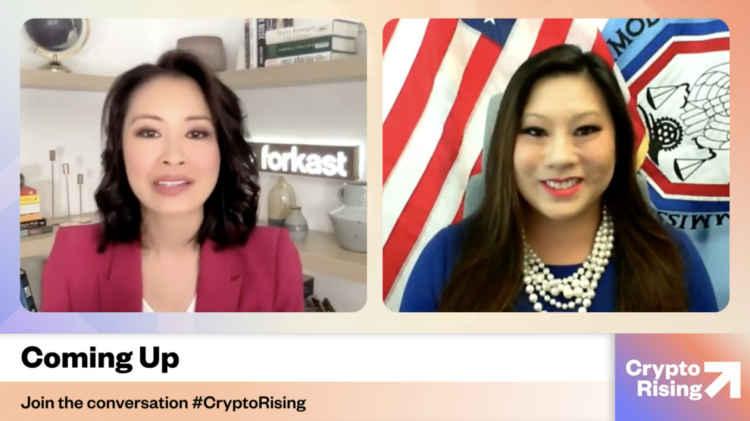 It’s supposed to be summer in the northern hemisphere, but most of the talk in cryptocurrency markets is about the arrival of a crypto winter (read, price collapse). The industry has cycled through such times before, but the twist in this market slump is the eroding trust in stablecoins.

This was triggered by the multibillion-dollar collapse of the Terra stablecoin and sister token LUNA in May, setting off loud warning bells for financial market regulators everywhere.

Caroline Pham, commissioner of the U.S. Commodity Futures Trading Commission (CFTC), says putting out the Terra-sparked wildfire should come before anything.

“I think the priority is figuring out what can we do right now to help make sure that the retail public is protected and that this contagion does not spread any further,” said Pham, who spoke at the Forkast+ flagship virtual discussion The Future of Stablecoins.

(The event was streamed live on Thursday and hosted by Forkast Editor-in-Chief Angie Lau, with the commissioner; Zerocap Principal Trent Barnes; and Jason P. Gottlieb, chair of digital assets at Morrison Cohen LLP.)

It can be argued the current crypto world winter was caused by the macroeconomic storm of the Covid-19 pandemic fallout, a surge in inflation, pumped up interest rates, and a war in Europe.

But the implosion of the Terra stablecoin has set off a domino effect in the crypto world among companies exposed to Terra. Celsius Network and CoinFLEX are among the lending platforms that have frozen customer withdrawals — citing market emergencies — while the formerly high-flying crypto hedge fund Three Arrows Capital reportedly faces insolvency.

To illustrate the size of the slump: The total cryptocurrency market cap reached peaks of more than US$3 trillion last November. It’s now around US$911 million.

See related article: What lessons can we learn from Terra’s LUNA/UST meltdown?

Nevertheless, the CFTC commissioner said she thinks stablecoins could have a role to play, such as helping to promote financial inclusion by providing faster cross-border payments with less friction for countries with less developed payment infrastructures.

“The financial inclusion benefits of this technology is something not to be dismissed lightly, but that there need to be the right guardrails in place and particularly the right prudential requirements,” Pham said.

Regulators around the world have called for legal clarity on stablecoins — U.S. Treasury Secretary Janet Yellen wants a framework for stablecoins by the end of this year. South Korea, home of Terra-LUNA founder Kwon Do-hyung, has said it will speed up legislation of an act that would effectively regulate stablecoins and decentralized finance (DeFi).

Yet, exactly how to set rules of the road and laws for cryptocurrencies seem to remain the questions in many countries, including the U.S.

The CFTC commissioner has said that U.S. regulators failed to safeguard individual investors due to lack of clarity on the jurisdiction of different federal regulators over crypto. Currently, the futures commission has limited authority in regulating crypto derivatives, but not spot products like crypto tokens.

Pham said open discussion among different regulators is key to solving the uncertainty.

“I think joint roundtables between the CFTC and the SEC make a lot of sense. There’s precedent for that,” she said. “The CFTC has done that in the past with the SEC, notably when there was a flash crash in 2010,” said Pham, who added that it’s important to work with other authorities around the world.

Along with revised regulatory frameworks on stablecoins, Pham said regulators and central banks will need to play a bigger part in stablecoins and in crypto’s tomorrow. But educating the public is also key, she said.

“I think it’s very important that there is education and people really also need to understand the risks or that there’s no guarantees,” Pham said, a point that Zerocap’s Trent Barnes agreed with.

Regulations are important, but “education really needs to be front of mind for a lot of investors, particularly retail, that are getting burned and getting wrecked,” he said.

Pham also argues that regulators need to evaluate the technological potential stablecoins can have.

See related article: Hold onto your crypto bags, the regulators are coming

“Sometimes there may be certain specific risks presented from a technological perspective with whether or not there’s any strengths or vulnerabilities. But that’s how you would evaluate any technology. It is not something that is unique to blockchain. And so that’s where I think a technology neutral approach is going to allow us to capture the benefits of stablecoins.”

Regulations aside, investors are clearly unnerved about the future of stablecoins, but Jason P. Gottlieb, partner and chair of digital assets at Morrison Cohen LLP, had a more bullish outlook.

Bitcoin holds above US$19,000 support but top 10 cryptos fall