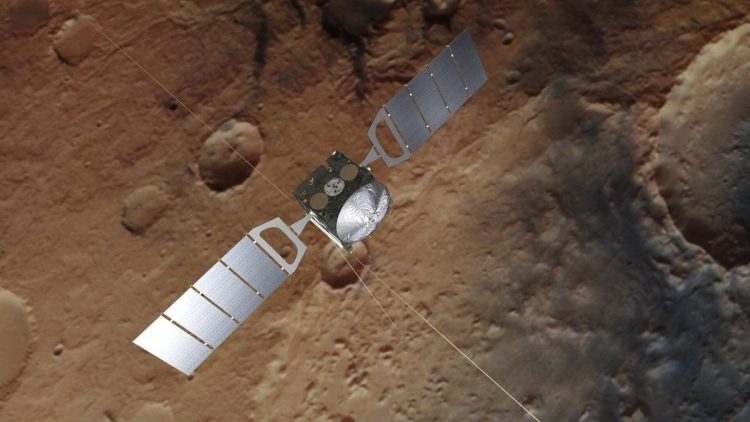 An illustration of the Mars Express spacecraft which launched in 2003.Illustration: ESA

The days of dial-up internet, AOL Instant Messenger, and Myspace may be over on Earth, but on Mars, the early years of the internet still live on. A Martian spacecraft has been running on software designed more than 20 years ago in a proprietary environment based on Microsoft Windows 98, and is long overdue for an upgrade.

The European Space Agency (ESA) is updating its Mars Express orbiter’s MARSIS (Mars Advanced Radar for Subsurface and Ioniospheric Sounding) software, 19 years after the spacecraft launched. The MARSIS instrument, the first radar sounder to orbit another planet, aided in the discovery of evidence for water on Mars in 2018. MARSIS sends low-frequency radio waves towards the planet using a huge, 131 foot long (40 meters) antenna, as the Mars Express spacecraft orbits around Mars.

The MARSIS does all of that using highly outdated software that hasn’t been updated since the spacecraft launched in June 2003. The software was designed in an environment based on Windows 98, which doesn’t work with the modern-day internet unless you jump through a lot of hoops. “After decades of fruitful science and having gained a good understanding of Mars, we wanted to push the instrument’s performance beyond some of the limitations required back when the mission began,” Andrea Cicchetti, MARSIS deputy principal investigator, who led the development of the upgrade, said in a statement.

The new software was designed by the National Institute for Astrophysics in Italy, which operates the spacecraft. The team behind the new software implemented a number of upgrades that would improve the instrument’s ability to send and receive signals, as well as its on-board data processing “to increase the amount and quality of science data sent to Earth,” according to ESA.

“Previously, to study the most important features on Mars, and to study its moon Phobos at all, we relied on a complex technique that stored a lot of high-resolution data and filled up the instrument’s on-board memory very quickly,” Cicchetti said. “By discarding data that we don’t need, the new software allows us to switch MARSIS on for five times as long and explore a much larger area with each pass.”

The new software will be used to study regions near the south pole on Mars, where signs of liquid water on the Red Planet were previously detected in lower-resolution data. With MARSIS ditching its Windows 98 era software, it will be able to examine those regions much quicker, using high resolution data. Figuring out whether Mars had liquid water is crucial to knowing whether the planet was ever habitable during its early history, and if it could have possibly hosted some form of life.

Mars Express has been hard at work for the past 19 years, with the spacecraft’s mission being extended seven times so far. Although it is currently ESA’s lowest-cost mission, Mars Express has been delivering valuable data on Mars, and its moon Phobos. And with the new software update, the team behind the spacecraft is expecting greater things from this retro orbiter. “It really is like having a brand new instrument on board Mars Express almost 20 years after launch,” Cicchetti said.

YouTube Will Let You Zoom In Videos, if You Pay Up